The table has Manchester United third, and Manchester City fourth. A point separates them. One might think that United are where they should be while City are clearly flopping. The table doesn’t lie, right? It does sometimes.

In October, City were definite title contenders while United were no better than a year before under the disaster that was David Moyes. A lot has been made of Louis Van Gaal’s so-called “philosophy” this season. All of a sudden, the players do seem to have adjusted to it and not a moment too soon. Fast forward a few months and United are the favorites for the derby. I say all of a sudden because three games ago United were a team devoid of any identity and bereft of confidence. Van Gaal was a tactically inflexible tulip and didn’t get along with Ryan Giggs, depending on which paper you read. Many thought he wasted money on his signings. Angel Di Maria has supposedly flattered to deceive, though he has seven games to match David Beckham’s club record of 15 assists in one season. The Argentine is on ten, so far. The under-utilized Ander Herrera has been a revelation, Daley Blind is a wonderfully intelligent little player and Marcos Rojo has transformed into a reliable centre-half.

On the other side of things, the jury is still out on Luke Shaw while Radamel Falcao has set social media ablaze with mockery. LVG has used youth, introducing James Wilson, Paddy McNair and Tyler Blackett to the first team squad. The team plays a patient, passing attacking game unlike the up and down wing play of old. However, the real key is how lucky Van Gaal has been. An injury to Robin Van Persie and Angel Di Maria’s red card against Arsenal has allowed him to unleash Marouane Fellaini and Juan Mata. Both were Moyes’ only signings and both hadn’t lived up to their hefty price tags. Neither seemed to have a place in the Dutchman’s plans…now both are simply undroppable. United are all smiles right now. 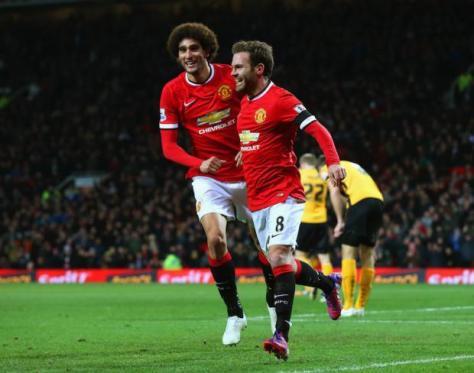 We should have seen the decline of champions Manchester City coming before a ball had been kicked this season. If not then, we definitely should’ve seen it coming after the first Manchester derby at the Etihad. The Citizens made hard work of ten-man United that day. That game has been a model for City’s entire campaign. Nothing comes easily to them any more. Everything is so tense and difficult. When Sergio Aguero is unfit or in poor form you wonder where the goals will come from. On the defensive end, when Vincent Kompany plays like Richard Dunne then there’s just no way you can keep a clean sheet. Lord knows that when Yaya Toure went away on AFCON duty, they couldn’t win a game. This shows just how horrible their transfer dealings have been.

Last year’s crock, Stefan Jovetic, is no Aguero and is already seeking a return to Serie A. Frank Lampard is a senior citizen and can’t be relied upon even though he has chipped in with some vital goals. Eliaquim Mangala has so far been a big bust, and Bacary Sagna has been a wage gobbling non-event. What Fernando does, I’m not quite sure. It’s too early to judge Wilfried Bony, but he isn’t inspiring confidence just yet.

Manuel Pellegrini’s tactics have also been called into question, but sometimes I wonder if he and the club’s hierarchy backed themselves into a corner. As a result, where United are in the beginning of a revitalization project, City are at the end of a cycle. Their players are too old and no longer bothered. Look at Yaya Toure. His head is no longer in it and it’s evident. Except for Sergio Aguero, the rest of them just can’t pick themselves up for the campaign push. City need to move many of the older heads on and bring in younger players, and given Financial Fair Play, they’ll have to sell before they can buy.

This will be difficult considering their players are on astronomical wages. Most are no longer at the level of the teams who can afford to pay them. Any big squad upheaval will have to include an influx of young English talent if they are to satisfy UEFA and EPL requirements. But how can they bring in young English prospects without breaking the bank? It’s a tough ask and in my opinion, City are clearly stuck between a rock and a hard place. The club has invested a lot of money in the academy as you’d expect, but it may take years for this to bear fruit. As highlighted by The Mirror, even the Manchester City Academy website will tell you how hard a task this will be for the Citizens after years of neglect.

Every club has to regroup at the end of a cycle and for Manchester City, the time is now. The real question is whether or not under fire manager Manuel Pellegrini will be the man to oversee the rebuild.

So United are riding high while its doom and gloom at the Etihad, right? At this moment in time, yes. But derbies can change moods very quickly. If City win they’ll get their confidence back and that high should kick-start the end of season run-in for them. A United loss could have serious implications as United then go to Stamford Bridge to play the champions-elect, Chelsea. The eight point margin over Liverpool could dwindle fast if the Merseysiders get their act together, making the top four race very interesting indeed.

United haven’t beaten City in the last four attempts.They’ll be desperate to not let it extend to five. That’s all the motivation they need. City need to arrest this slump and there’s no better place than Old Trafford. This game has classic written all over it and no matter where you are in the world, tune in, because this will be a ‘great advert for the Premier League.’