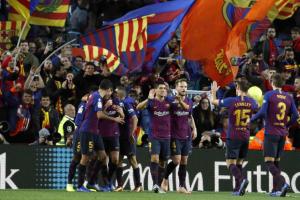 City win at Wembley with a quick disassembly of Tottenham,
Martial and Zaha went down like they got shot, son,
At Turf Moore Barkley was looking sparkly under Sarri,
and at the Camp Nou Lopetegui is out of his camp, now.

“Our attacking options are different now, as is our on-the-ball and off-the-ball movement. We’re more confident”, Brampton veteran midfielder and Canadian captain Atiba Hutchinson told me, in the post game presser.

Coshcast S6E8: Chelsea are Hazardous and so is Ronaldo

Liverpool find Chelsea Hazardous but rescue a point through Sturridge at the Bridge, United go 3-5-2 but it provides no shelter from Anderson while Pogba joins Salah in the awkwardly early substitute club, there are routine wins for the North London sides and Manchester City continue to have more possession than the kid in the Exorcist.