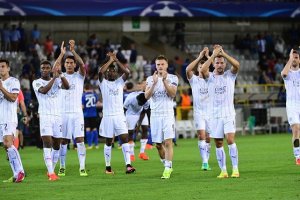 I spent at least five minutes last night trying to remember a better Champions League debut. I recall Rooney getting a hat-trick for United on his first time in a red shirt when he was young, fit and pretty good but I don’t think anything comes close to Leicester City. Ranieri might be aiming for third place in the group but his players clearly have other ideas, racing to a 3-0 win over Club Brugge. It was that comfortable for them Mahrez even scored a penalty, which complimented his free kick rather nicely.