With the signing of Aubameyang all but confirmed, we take a look at the tactical ramifications for the shape of the team, and how Arsene Wenger might go about getting all four of his star players into the same side. 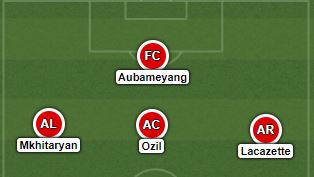 In this scenario, Lacazette gets shifted out to the right. He wouldn’t be at all happy about it, despite having played the role in the past for Lyon. Ozil will always retain his central #10 position, so Mkhitaryan would play from the left, with Aubameyang as the central striker.

Lacazette retains the central striking role, Mkhitaryan plays from the right  and Ozil of course, stays where he is. Aubameyang’s pace is utilized wide on the left. Like Lacazette, he would not be happy about it, despite having played the role in the past for Dortmund.

3. 3-4-3 with either Aubameyang or Lacazette on the bench 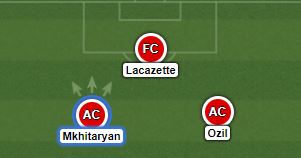 Arsene Wenger has already mentioned that he can see Mkhitaryan playing a deeper, central midfield role for Arsenal in the future. This would get all four star players into the side, as well as coming some way to getting back the ball retention in midfield that has been lost since Cazorla’s injury. It is also easy to imagine the manager playing Aubameyang wide in a 3-4-3, given how often he’s used Welbeck in that role in the past.

How would you line up these players to get the best out of them? Let us know in the comments below, or on Twitter.

Coshcast: All roads lead to #WengerOut

The best so far: Lukaku, Lacazette or Morata?