Mohamed Salah: Fitting in at Liverpool

Mohamed Salah’s move from Roma to Liverpool appears all but done. The 25 year old who reached double figures in goals and assists in Serie A last term will join the Merseysiders for a lot of money (the exact amount remains unclear), and he’s an exciting addition to the team, and the league.

The question is, of course, where does he fit in?

Last season, Liverpool predominantly played a 4-3-3, and with everyone fit, the first choice front six looked like this. 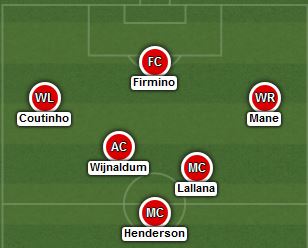 The obvious re-jig would be to drop Coutinho into central midfield in place of Lallana – not that the Englishman particularly deserves to lose his spot – move Mane out to the left and use Salah on the right. The Egyptian is left footed (although he’s not bad with his right – rare for a left footer) but he’s not a typical winger. His game isn’t about getting to the byline and whipping it in, rather cutting inside from the right, linking with the striker and finding space for a shot or a cute pass.

This is a formidable set-up, and one that will likely do a lot of damage to any team that leaves space for Liverpool to exploit. I’d not be too surprised to see Salah occasionally take on Firmino’s false nine role either – something he did every so often in Rome.

What will be fascinating though is to see how Klopp, and Salah in particular, deal with teams that sit deep and get men behind the ball. Those sides were the ones that caused Liverpool problems last season, and adding someone whose game is all about pace isn’t the obvious key to that particular lock. Perhaps Coutinho in a deeper role could help pick through those low blocks, but Salah’s presence pretty much guarantees that even more sides will sit deeper against the Reds next season, so it’s something that the manager must find a solution for.

Something not to overlook in Salah’s success at Roma, especially last season, was the presence of Edin Dzeko. The target man, who was in lethal form himself, acted as the perfect foil for Salah’s speed and trickery as the Bosnian held the ball up, flicked it on, won headers and played one-twos.

Liverpool don’t currently have a striker of this type, and any relationship Salah has with Firmino or Origi is more likely to be based around movement and rotation of positions. Watch out for the striker pulling out to the right to allow Salah to make a diagonal burst through the middle. Sort of like Theo Walcott but, you know, better.

Still, it might be an idea for Klopp to bring in a target-man figure for Salah and the other nippy tricksters to play off of, at times, especially if Sturridge does leave. Someone like Llorente would be ideal off the bench in the event that the ground game isn’t breaking through.

All permutations aside, this is an exciting signing. Salah is a player that gets fans off their seats, and his productivity will be a real asset to his new team. Now all Liverpool fans must do is hope that at least one of Egypt or Senegal don’t make it into 2019’s African Cup of Nations.

How do you think Salah will fit in at Liverpool? Let us know in the comments below, or on Twitter.

AC Milan: Is the sleeping giant waking up?