Manchester United: Can they score? They always score

Listen to the latest Coshcast below. If you enjoy it, subscribe right here on Itunes.

They’ve been an enigma this season. They’ve played good football, they’ve controlled games and created chances aplenty. This is the football every Manchester United fan wanted to see after the days of LVG’s “possession” game, filled with sideways and backwards passes. This is exactly what every Red Devil wanted to see after David Moyes oversaw the rapid demise of the club in the first season after Sir Alex retired. It’s not quite all that glorious currently though, as their league position remains a bit of a mystery.

Manchester United are currently in 5th place in the league with eight matches remaining. They have the second best defensive record behind 2nd-placed Tottenham, and are tied with Spurs for the fewest losses (three). United haven’t lost a match since October 23rd, 2016, and are unbeaten in their last 21 in the league. There is still a fat chance that this team will make the top four by the end of the season, given that they still have to play Chelsea, Spurs, Arsenal, and Man City in their remaining eight games and have a chance of being the most influential team in the run-in.

The Red Devils can boast having the third best away record – albeit with two games in hand. Most teams with these records would be happy, but Manchester United have inexplicably  under-performed.

Let’s focus on their home form: United are bang in mid-table when comparing home form, and have a mind-boggling six 1-1 draws and three 0-0 draws at home. Out of 16 home games, United have drawn nine. They haven’t just drawn to anybody either – Hull, Bournemouth, West Ham, Stoke, Burnley, West Brom, Everton, Arsenal, and Liverpool have absorbed pressure and come away with a point each from the Theatre of Dreams.

Goals for United at home have been the stuff of dreams…as in, United have been forced to dream of them. It’s been a wobbly season, and few things have remained firm – the post being one of them. This is in stark contrast to what one would expect when looking at home fixtures. In the 2010-2011 season for example, United won 18 out of their 19 home games (with one draw) which propelled them to the league title.  Would they be winning this league with better home form? Perhaps. Seven out of nine wins from the above list of draws would add 14 points to their tally, putting them in 2nd place at 71 points with a game in hand on Chelsea who have 75 points, who they still have to play at home.

I drive myself crazy thinking about the chances created and the misses and the posts all the time. Does this team need to sign a player like Griezmann? Neymar? Why can’t we just have another Javier Hernandez? He would’ve been prolific had he still been in the squad – a thought shared by Mourinho recently. Why can’t Martial, Rashford, Lingard, or Mkhitaryan chip in with 10-15 goals apiece? Can you really blame Jose Mourinho for this? United have 17.2 shots per game. The second highest shots per game behind Tottenham at 17.3. Here’s where it gets crazy: Tottenham have scored 64 goals while United have scored 46. 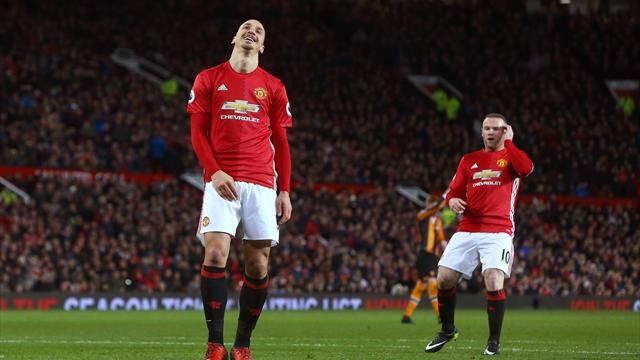 Zlatan Ibrahimovic has been the most prolific scorer for United as well as the most wasteful. His 17 goals have counted for 36% of United’s league goals this season. He has assisted five as well. Call him wasteful if you like, with the highest shots per game in the league at 4.3. The next best goal scorers on the team are Mata with six and Pogba, Mkhitaryan, and Rashford tied on four apiece.

There are clear issues with the United attack. Rashford is too ‘green’ to score 20-25 goals a season. Martial can be phenomenal to watch, but sometimes goes missing in games. Could you see him scoring 20-25 in a season? Yes, if he just dribbled at the wingback, cut in and shot a little more, perhaps. Mata is a midfielder, and we can’t expect him to be a 20 goal a season player. Rooney’s days at the club are numbered and we can’t say much about him except that he’s scored just two and assisted five in the league.

Perhaps you can dig a little into this fact: United are top of the table when it comes to hitting the post, with a whopping count of 27 (all competitions). Pogba himself has hit the post nine times (all competitions), and should perhaps rename himself “Pogbar”. He also has compilations of “robbed assists” on YouTube – evidence of his creating chances that other players then miss.

In terms of chances created, United sit third overall, with 389. Liverpool are top with 417, Spurs 405, Man City 378, and Chelsea 339. Its not like United aren’t able to create chances or make forward passes, they’re just drawing blanks and have been doing so for a remarkably long spell. It’s an anomaly and things should go back to normal…eventually.

So, can United score? They always score. As is told by the historians. Will they score for the rest of this season? They really should, unless they’ve actually been practicing hitting the post (or there is a voodoo spell on every opposing goalkeeper to stand on their heads when entering Old Trafford). I’ll say you can expect a few goals to go in by season’s end, but if those aren’t enough to get them into the top four, then you can expect to see a very interesting transfer window.