Listen to the latest episode of the Coshcast, below. If you enjoy it, subscribe right here on Itunes.

This season Colin is exploring Ligue 1, club by club. Earlier this week he brought you the history of Lille as a city and a football club. Then, over the weekend he tried to watch Lille vs. Guingamp to report on the game, but ended up writing about something completely different. Read on…

Not a classic. Instead I’m going to indulge myself (further) and talk about Lille’s jerseys and how they fit into the paradigm of jerseys that look better because of the sponsor logo.

Lille have been sponsored by Partouche Casino for several years now, save a brief, anomalous dalliance with a sports nutrition company in the 2014/15 season – an episode that coincided with their adoption of Nike uniforms, incidentally[1]. The large, stylised ‘P’ that has sat on the front of their uniforms whilst being sponsored by the casino has looked good enough to have seemed part of the original design process. It’s been around for long enough that, in my mind, it has made the leap to iconic team/sponsor match-ups, some of which we’ll get into below.

First things first; Liverpool. Liverpool have had a series of iconic sponsors over the years, from Crown Paints, to Candy, to the Carlsberg of my era (all Cs, how about that?). Starting in 1992/93 and running until 2010/11 the Danish brewery became a part of the aesthetic of the club.

My second Liverpool shirt was the gold third shirt from 1994, from an era when third or alternate jerseys were still a very new phenomenon. Initially introduced because of a clash with Sheffield United’s red and white stripes, it stuck around for a few more years.

It changed the season I was working in the Liverpool club store, and the reaction was one of shock, to say the least. As part of the publicity push I was asked to wander around the city centre wearing the new shirt and advertising pre-sales. I was consistently accosted by fans, aghast at the new change, furious at the interloper Standard Chartered.

To my eye, the size of the sponsor logo changed over the years, getting smaller as the years progressed. I think the 90’s shirts were better balanced, but physically, those shirts were enormous, so the idea of wearing one now is far-fetched. As an interesting aside, Liverpool would sell the away shirt for the year before the change without a Carlsberg logo specifically for those who would prefer to not have a beer company plastered across their chest.

Inter Milan are another who have had a long time sponsor that became part of the fabric. Pirelli have been the club’s shirt sponsor from 1996-97 to the present day, which actually came as a surprise to me. Combined with the iconic black and blue stripes, it was an integral part of the experience of watching Italian Football on Channel 4 in the mid-1990’s. 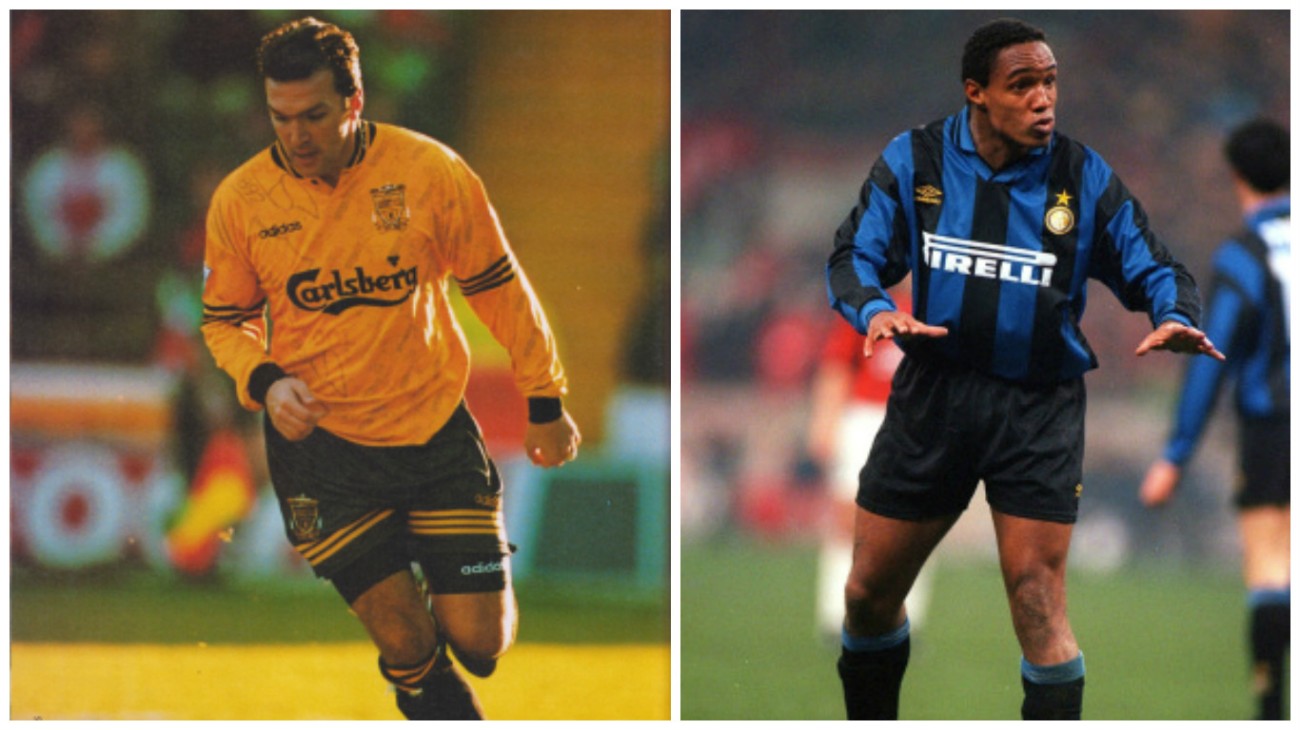 The early days of the Premier League birthed a few classic matches including Newcastle United and their match made in heaven with Newcastle Brown Ale. It’s quite a lot nicer than their current deals with the various payday loan companies or betting companies that have proliferated the current shirts of football teams.

The early days of the Premier League birthed a few classic matches including Newcastle United and their match made in heaven with Newcastle Brown Ale. It’s quite a lot nicer than their current deals with the various payday loan companies or betting companies that have proliferated the current shirts of football teams. 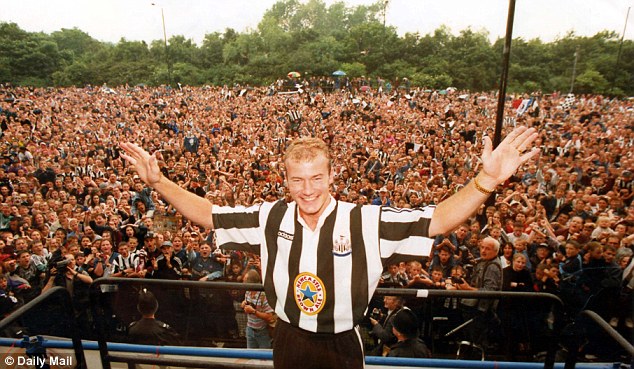 Alan Shearer with some hair, Newcastle

Manchester United have had several new sponsors in recent years, the most recent being the widely mocked Chevrolet logo, sitting awkwardly on the chest. Obviously the best Manchester United shirts ever made were the ones in the 1990’s as worn by Eric Cantona. I don’t know anyone that ever owned any Sharp products, but their sponsorship of Manchester United defined an era.

Outside of England, but not too far, I often associate Rangers with the McEwan’s logo. It’s a look that goes hand in hand with Paul Gascoigne’s time there, a combination that in retrospect is particularly distasteful.

Actually, booze and football have long been linked, Tottenham and Holsten being another long partnership, starting back in 1985 before they made the switch to Hewlett Packard in 1995/96, and then back to Holsten just a few years later! They moved away for good in 2002/03, shacking up with Thompson holidays. I was going to use a picture of Jurgen Klinsman , but that would mean passing up an opportunity to get Chris Waddle’s mullet more exposure.

Beyond Europe, Colo Colo have been sponsored by Cristal, a Chilean beer maker, since 1996, a relationship that only ended a couple of years ago. I consulted a Colo Colo fan who pointed me towards Gabriel Mendoza as a representative of his club. I acquiesced when I saw how much he looked like the eponymous Mapuche chieftain depicted on the club crest.

Staying in South America, Independiente had a long association with AdeS, a soy-based drink manufacturer from Argentina. Apparently the name is a compression of Agua de Soja, so now you know about Argentinian drinks. Ask me about Uruguayan ones and I won’t shut up about Salus, but that’s for another article. Independiente were sponsored by AdeS for most of the 90s, and the basic white wordmark worked very well with the colour scheme of the club.

We go back to England for the final shirt on this little journey, back to where I personally grew up and a little club called Tranmere Rovers. I won’t get into the history of them too much, but John Aldridge played for them when he was still good [2], and they were supported by Wirral, the local county council, for years. The shift to Home Bargains, a discount food and snacks store, was a jarring, discordant, shock that I’m yet to fully recover from. It’s my birthday on Thursday, so if anyone wants to give me a surprise, you know what to go for now. 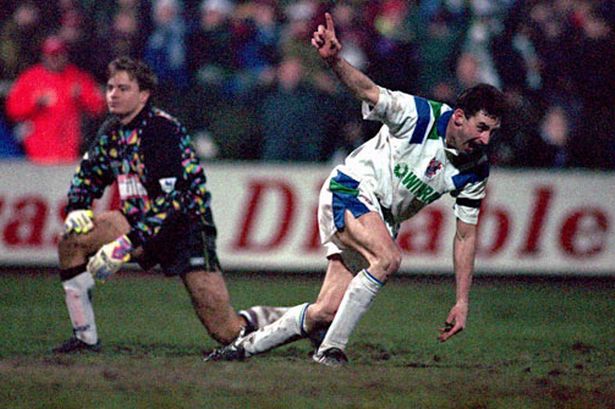 [1] We already know I’m a contrarian, so I’m stating it for the record here; Nike can get fucked. Too ubiquitous, too enmeshed with the marketing gargantuan that is high-level soccer, too bloody obvious. Adidas get a pass because of their history, but only just.

[2] Fresh from being the first non-basque player to ever turn out for Real Sociedad.

Just a Lille Bit About Football