Girondin de Bordeaux: Sometimes you have a vintage year

I’m sure it’s been written before, but football clubs really are a lot like wine chateaus. Wine grapes are terroirs, meaning that whilst the variety – Sauvignon Cabernet for instance – is the same the world over, the specific environmental conditions of the local region affect the grape in different ways. These varieties are brought together by a vintner and, after a long process of crushing and fermenting, are blended to create the final product. The final product changes from year to year depending on what the vintner wants his wine to taste like and the quality of the grapes available. Does this sound familiar?

Football players are all playing football, a lot of them in similar roles, but they all do it slightly differently dependent largely on upbringing, physical ability, and coaching. These players are brought together by a manager (or director of football) and, after a long process of fitness and tactical training, they are blended to create the final product. This final product changes from year to year, depending on how the manager wants his team to play and the quality of the players available.

The product varies year by year. Sometimes the blend is wrong, sometimes the quality of the raw materials isn’t up to snuff; sometimes small insects suck out the innards of the raw ingredients and they have to be abandoned, but admittedly that’s probably more specific to vineyards[1]. But sometimes everything goes to plan, the ingredients are better than they have been for years and they work together in harmony to make something far more than the sum of their parts. Sometimes you have a vintage year.

Football Club des Girondin de Bordeuax had a vintage era, winning Ligue 1 three times between 1983 and 1987. The team was home to several prominent members of the 1984 European Cup winning France team, including the free-scoring Bernard Lacombe, post Schumacer induced coma Patrick Battiston, and one corner of the Carré Magique, Jean Tigana.Tigana joined fellow Carré member Alain Giresse, whose hang dog expression and magical feet had been lighting up the Bordeaux midfield since 1970, and with Aimé Jacquet directing traffic from the sidelines the team hit great heights.

As well as the three league titles, they won back-to-back Coupe de France titles in 1986 and 1987, beating minor rivals Olympique de Marseille both times. The line-up for the 1987 final included the Yugoslavian twins Zlatko and Zoran Vujovic who had both arrived at the beginning of the season. Zoran was a defender and Zlatko played up front and it’s very easy to imagine them both in the streets of Sarajevo perfecting their particular art against one another. They were more than a novelty act, and Zlatko scored the second goal in a 2-0 scoreline whilst Zoran helped the unfortunately monikered goalkeeper Dominique Dropsy keep a clean sheet.

There was no real European success in this period, the closest they got being a semi-final loss to Juventus in the 1984-85 competition. The Bordeaux faithful would instead have to wait until the culmination of the 1995-1996 season to see Les Girondins in a continental final. A particularly excellent home-grown crop led them to the final of the UEFA Cup where they lost 5-1 to Bayern Munich over two legs. The promising youngsters that had been cultivated in the Bordeaux set-up left that summer, leaving us to wonder what could have been had they managed to keep the likes of Bixente Lizarazu, Christophe Dugarry, and Zinedine Zidane together and into their prime.

These ‘what-if’ hypotheses are one of the great indulgences of sports fans and a pleasure that I regularly indulge in[2]. The other, of course, is nostalgia. There are two ways to exercise football nostalgia, one more healthy than the other. Watching episodes of Premier League Years (or earlier!), wearing vintage shirts to the pub, and playing in leather boots is all OK by me. Where the nostalgia breeds disquiet within me is the romanticism around the unseemly elements of old football crowds and the continued invocation of the past as a means to damn the present.

Lionel Messi has suffered from this. His career and contributions to the Argentinian national team will never be truly appreciated until Maradona and his devotees shuffle on from the mortal coil. As a Liverpool fan I’ve seen this up close and personal as fans refuse to let go of the fact that football has changed and Liverpool, unfortunately, got left behind.

There are a lot of reasons for this in this particular case that I’m not going to get into here, but it invites ruminations on the Ship of Theseus and the nature of a football club, and the futility of this reductive, grasping nostalgia that seems to seep into sports fans all over the world. There’s a Portuguese word, saudade, that roughly translates into a longing for something that never was and will never be and I think that’s the affliction we’re tussling with.

I bring this up because of Bordeaux’s kit this season. Usually I’d wait until the match report to comment on this but the kit is often so tied up with the identity of the club and the fans I’d raise the subject here. 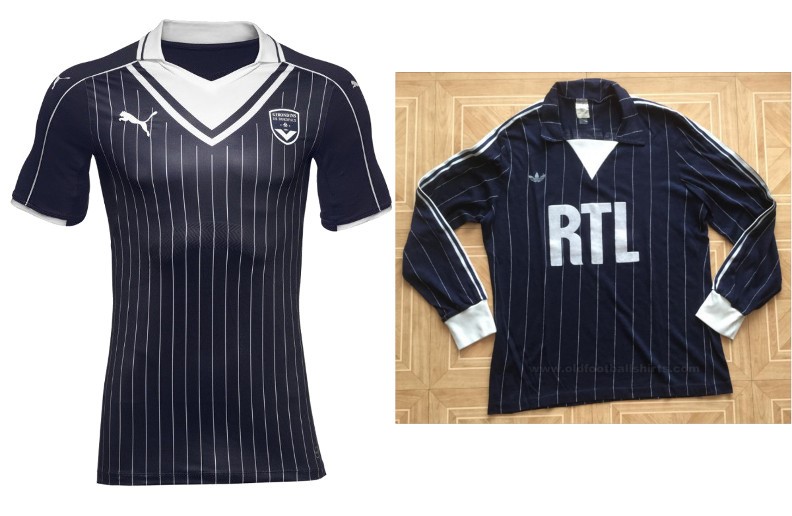 Objectively the new shirt (left) is wonderful, featuring the scapula (chevron) that the club is known for and echoing the thin pinstripes of the 1980’s (right) shirt. If it only went that far I’d be in full support of it, but the club advertising it as the Maillot Eighties is uncomfortable. The team, and fans, are essentially asking the current players to physically embody one of the best teams that Bordeaux has ever seen, and one that most of them weren’t even alive to see play.

Before every game they are pulling history over their head and are being thrust into an unfair position of playing to the standards of the greats whose successes, it should be remembered, are being viewed through unapologetic rose-tinted lenses. Not only that, but if they show signs of being weighed down by this dust of ages they will be dismissed as callow or disinterested, and if they do succeed it’ll be because they’re channeling the spirits of Giresse and Tigana, rather than because of their own talent.

This catch-22 is common at every club, the lows of a bad year never being considered alongside the highs of a good one. Fans want success every year in every game and if that isn’t met, the ghosts of trophies past are raised with good managers and good players run off to give another group six months to do the same. Bordeaux’s adoption of this 80’s kit might be an attempt to distract their fan base from the 11th place finish they suffered last season, but it probably won’t give them any more patience with new manager Jocelyn Gourvennec, despite his unparalleled run of success at Guingamp over the past six years.

The acquisitions of Jérémy Toulalan and Jérémy Menez are similarly baffling, but they were brought in on free transfers and their age and experience could help bring some levity to what is a very young team. Uruguayan international Diego Rolan gets star billing up front, but they’ll need him to score the 15 goals of 2014/15 rather than the 7 of 2015/16.

Elsewhere, Bordeaux have three entries into French Football Weekly’s Le 50. Enzo Crivelli is on loan at Bastia, where he scored two goals last week, and Paul Bernadoni will be hoping to stake a claim in goal; a passage likely smoothed by Bordeaux conceding seven goals in the first two games of this season whilst having Jérôme Prior between the posts. The talent to keep an eye on, however, is Adam Ounas. The arrival of Menez does mean the youngsters starts may be limited, but he’ll be hungry to take advantage of any injuries or dips in form anywhere across the front line.

Bordeaux hosted and beat Nantes, 1-0 in the glorious Stade Matmut Atlantique on Sunday 28th August. I’m looking forward to seeing if this inconsistent team can get into a groove and write their own history.

[1] Rather wonderfully for this metaphor, the great Phylloxera infestation of Bordeaux from 1875 – 1892 was brought to an end by importing rootstock from North America analogous to bringing in new players or perhaps even a new ownership group.

[2]  One of my favoured discussions is the assembly of a dream five-a-side team. Rule 1. One goalkeeper, four players. 2. You are one of the players. 3. Any player, any era 4. You have to go to the pub with them afterwards. For reference, my team would be Jorge Campos, Franz Beckenbauer, Myself, Eric Cantona, Zinedine Zidane. Comment with yours!