Three years ago Gareth Bale joined Real Madrid from Tottenham Hotspur for a world record 80m transfer fee. Real Madrid fans were upset because his signing came at the cost of Mesut Ozil’s place in the team as he was jettisoned to perennial underachievers Arsenal. Florentino Perez poached, a pacey, prolific all round athlete to lead Real Madrid to their 10th Champions League trophy and knock Barcelona off their perch.

Here’s what happened; Real Madrid did win La Decima, Bale did score the winning goal in a feisty game versus Atletico Madrid and he also won the Copa Del Rey by running rings around Marc Bartra and the Barcelona defense. So far he has been a success. However, there’s one aspect of this plan that has not panned out. He does not lead this team the way he and Florentino Perez want him to. No one expected that for the next three years Cristiano Ronaldo, who Bale was supposed to outpace (literally and figuratively), would have back to back Ballon D’or performances. Bale was good but he quickly learned that Cristiano was in no mood to surrender his position to Gareth Bale. He had bigger fish to fry in Lionel Messi.

Let’s take a look at the stats from Bale’s first two seasons at Real Madrid. In his first season he got on like a house on fire. The crowd warmed to the Welshman and his performances justified his position as an important cog in the Real Madrid trident attack. We decided to focus on La Liga and the Champions League for this purpose. Though as alluded to, Marc Bartra will never forget the sight of Bale in the Copa Del Rey

Now let’s look at 2014/15. Bale had a very good start to the season but injury prevented him from playing as many games as he’d have liked to and as the stats show, a fit and firing Cristiano Ronaldo is a very tough proposition to deal with.

This past 2015/16 season has been quite interesting. Cristiano Ronaldo is 31 going on 32. He’s supposed to be slowing down. His powers should be waning, this was supposed to be when Gareth Bale took over the team. In many ways new manager Rafa Benitez wanted to do just that. Benitez gave Bale the free central attacking role he so desired. Ronaldo’s role became far more restricted. Clearly Ronaldo did not like Rafa while Bale took to his new manager very well.

When things weren’t going Madrid’s way Florentino Perez reneged on his promise to stay with the Spaniard instead firing him and naming Zinedine Zidane the new manager. This time there was no free role for either. Both were stationed primarily as inverted wingers and both were asked to defend a hell of a lot more than they previously would have. The results were another Champions League title in which Cristiano Ronaldo broke his own record and scored the trophy winning penalty. The Ronaldo Ballon D’or campaign is on in full force again.

However, in all of this we have actually lost the fact that while Ronaldo’s numbers are astronomical he is showing signs of regression. Yes, in all competitions he scored over 50 goals yet again but that number is less than the previous year and he regressed in every other statistic as well. It seems that even Ronaldo cannot defeat father time.

This particular season was a mixed bag for Bale. He played more games in all competitions than he did in his first season but he suffered from inconsistent form. Less goals, less assists but more chances created and key passes seems to suggest that he was trying really hard but things weren’t falling his way. Whereas on Ronaldo’s side every single statistic improved on the year before. He really was a sensation and it comes as no surprise that his form over these two years resulted in Ronaldo claiming back to back Ballon D’or titles.

Though at Real Madrid he may have played understudy to Ronaldo, it’s becoming more apparent that Madrid are shifting to a Bale-centric side and this may in fact be a necessity. Where Ronaldo saw an overall decrease in productivity, Gareth Bale saw a major increase. Below I’ve plotted their stats against each other dividing the key stats by the number of appearances. The results are fascinating. 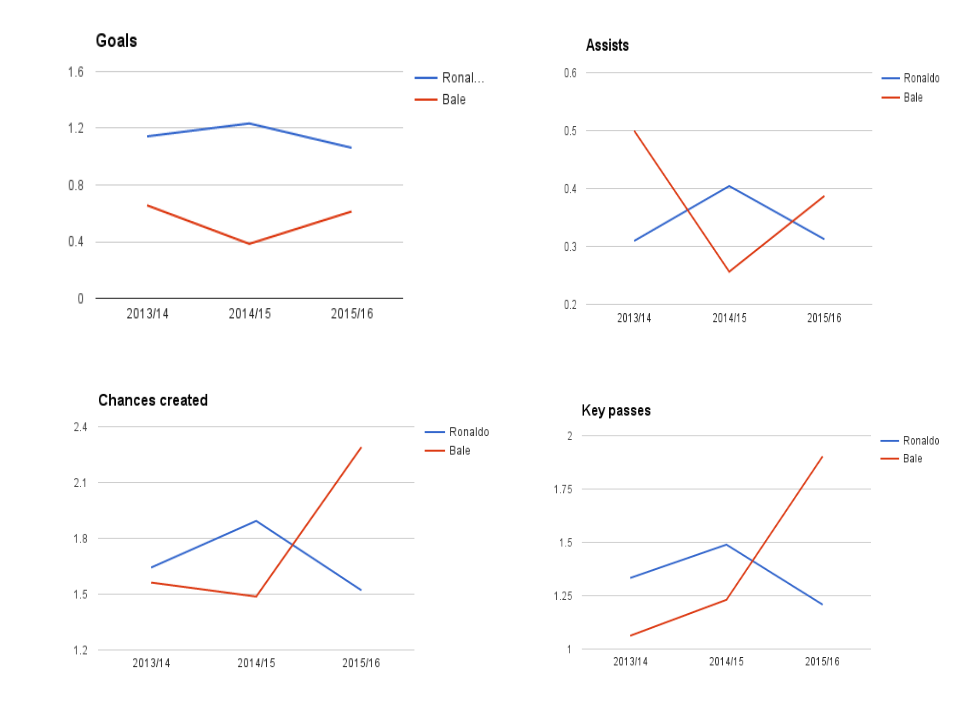 The stats show that Bales returns have been on the rise while Ronaldo’s on the decline. They also show that, as age robs Ronaldo of his pace and power, he increasingly has to remain closer to goal. As a result he’s become even more of a striker than ever before and his realm of influence on the attack has in fact reduced.

Just a season before he was scoring bucket loads and leading his team in assists and chance creation, this is no longer the case. Gareth Bale has taken on the creative responsibilities and shown a determination to improve in every attacking facet, except the goal scoring department. As of next season, unless Ronaldo is indeed superhuman, the gap in those numbers should also reduce. 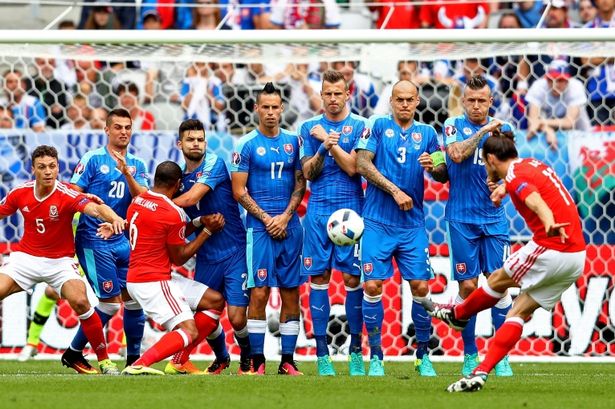 Perhaps the most obvious evidence we have of Bale’s rise and Ronaldo’s decline are their contrasting performances at Euro 2016. Both are the best player’s for their respective countries. Both lead their teams in scoring and both determine how well their teams will do. Both use the knuckleball freekick technique but it isBale who has scored two glorious freekicks and has 3 goals overall. Ronaldo has been woeful with his freekicks and even missed a penalty costing his team a valuable 3 points against Iceland. He did redeem himself by setting up one and scoring two against Hungary, however Ronaldo should have carried Portugal triumphantly over the line but instead they barely limped over it.

So with the stats showing Cristiano on the wane, Bale on the up and Bale so far being the player of the tournament at Euro 2016 we could be seeing the beginning of the Gareth Bale era at Real Madrid and on the world stage. Cristiano Ronaldo’s time has been historic. He’s a world great but all good things must come to an end. Everything points to the establishment of Gareth Bale’s legacy and we can’t wait to see it materialize.