A week on from crushing defeat in the Europa League final,  @Real_LFC_Fan takes a step back and evaluates Liverpool’s first season under Jurgen Klopp. Can he get more consistent performances from this squad, or does this summer require heavy recruitment?

For the first time since our league campaign as underdogs in 2013/14, I genuinely believed that Liverpool would end the season as heroes. I could actually envision Coutinho scoring that last minute goal and running to a sea of red and celebrating like it was 2005. But alas, Liverpool fans of the modern era can’t have nice things anymore… unless we’re talking about Klopp and how Emre Can became the best thing since in-form Gerrard. I mean, that jaw line alone could cut across two lines of defenders.

I was told to write a season review from a Liverpool fan’s point of view and to be honest I don’t think I’m the most reliable person for the job. No, not because I’m a girl, but because I have this thing I like to call “football amnesia”. My brain automatically wipes out any memory of any match we’ve lost or every bad performance by the Reds… and lately, it’s been every other match.

What I do know though, is that there has been a lot of progress since Klopp took over in October. Yes, rival fans have been bitter and have constantly been nagging us about losing two finals in one season – but hey, that’s two more finals than your team has been in.

My favourite memory of the season definitely has to be Lovren’s winner against Dortmund. There is no denying that Liverpool vs Dortmund was a match made in heaven. From the Klopp connection, the fans’ connection and everything in between, the fixture was perfectly set up one of the most memorable nights in Europe. And let’s not forget that the Reds had previously knocked out their bitter rivals in the previous round. Next up was Sevilla in the Europa League final. It seemed like the perfect path to European victory.

And then Liverpool did a thing. The team collapsed dramatically in the second half of the final: a lazy, uncoordinated and unbearable match to watch. Regardless of the referee’s very questionable decisions and Sevilla players dropping like flies every ten minutes, the Reds were just not good enough. The worst part was… I knew. I knew it would end horribly. I knew I had to listen to my brain instead of my heart. But I wanted it so badly – it had been 15 years since the last Europa League trophy!

As the final whistle was blown, I just walked away from the match like nothing had happened. I refused to remember that Moreno basically handed the trophy to his beloved Sevilla, or how Firmino and Coutinho were nowhere to be seen after 45 minutes. I felt empty and betrayed. The one thing I had so much faith in had let me down. But this was not the end. 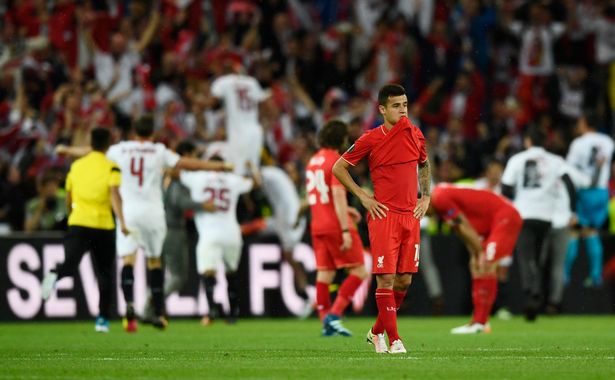 This is just the beginning of a new era at Liverpool. Klopp has only been in charge for a few months and he has everyone believing in achieving greatness. Whether you want to call it Rodgers’ team or Klopp’s team, he took these players and turned them into a closer, more appreciated group. Joe Allen has become the lord saviour with this majestic beard and careful passing that could actually part the Red Sea (no pun intended?). He is definitely one to keep.

On my immediate to-go list, I am including Benteke, Skrtel, Moreno (for obvious reasons), and Lucas (surprisingly, he is past it). That’s right; Mignolet is not the list because I do actually believe in him. He might not be the best out there, and his decision making is questionable but at this moment, I do think it’s hard to get anyone better. We’ll see how Loris Karius does.

I am also very skeptical of unproven youngsters because their egos get in the way when they cement their place in a team. Coutinho, Lallana and Henderson have become hot topics this season. Although they’ve all had bouts of brilliance, I am not sure that they can carry on being great contributors to the team. Personally, I think that these three players should be more consistent at this stage in their careers, but nothing tells me that it is happening anytime soon. It could be due to the overall effect from the lack of creativity from the entire team, or it could be individual performances affecting the team.

It is obvious that Klopp needs to recruit at least four or five players altogether in each department to carry on next season. All I ask for is that he does so in the summer transfer window and not in January when the stakes are too high. Of course I’d love a Gotze or Hummels, but we have to be realistic here. Liverpool as a club have not been very convincing, but I highly doubt any young player would want to miss out playing under a manager like Klopp.

I’m not one to blindly believe people but I’m sure I will be the one steering the believer boat once I see what Klopp can do with a couple million dollars. I admire the unrelenting attitude and togetherness that he has brought to the team and the fans as a whole. With fewer injuries and more consistent performances from key players, Liverpool can be a serious threat next season.

Norwich City: Klose but no cigar

Athletic Bilbao: A season to remember