This past weekend, England came back from two goals down to beat Germany, the country that defeated the three lions in the semi-final of Euro 96 and went on to win the whole thing. For the first time in what feels likes centuries, the top two scorers in the English Premier League are English. Those men are Harry Kane and Jamie Vardy. So it came as no surprise that they got the first two goals for England before Eric Dier headed home the winner in injury time. We discussed this in detail on our latest podcast (here on Itunes):

Before this, a lot of talk was centered around the fitness of talisman and captain Wayne Rooney. Many have called for him to be dropped, despite showing great form in the qualifiers. The notion is that Kane, Vardy and a fit Daniel Sturridge cannot be ignored. Rooney will go to Euro 2016, that is without question, but will the all time leading scorer for the three lions start, or observe from the bench? That is a question only Roy Hodgson can answer. For now, as we bask in the aura of England’s new golden generation of strikers, I ask, is this group is better than the last crop to capture the imagination?

Twenty years ago Terry Venables was in possession of one of the most menacing forward lines in European football. Alan Shearer, Teddy Sheringham, Les Ferdinand and Robbie Fowler were wonderful players in their day. They scored goals for fun at times. The game has changed though and poachers are no longer in fashion. So how do the strikers from these two eras compare? We’ll examine the players side by side to see if we can determine which strike force is better. Here we go! 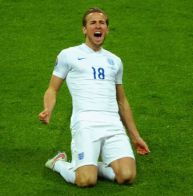 Alan Shearer is the top scorer in the history of the Premier League. Harry Kane has a long way to go before he reaches that record but many think he has the most potential to do it. However, we are looking at Alan Shearer 1996 vs Harry Kane 2016. With 37 goals in 48 appearances across all competitions, Shearer was an unstoppable force. Harry Kane has been fantastic for the last two seasons and after a slow start this season he has rocketed to the top of the Premier League scoring charts. Kane is the heir apparent to Shearer’s throne but the King reigns supreme here. Alan Shearer can raise his hand to the sky and celebrate this victory.

I almost gave this to Jamie Vardy after his wonderful backheel flick past that pesky German custodian Manuel Neuer. It’s not just this moment that got to me though. Vardy has had one of the most inspirational seasons of all time. Leicester’s push to the title has been spearheaded by Vardy with help from Riyad Mahrez. Let’s not forget that the Englishman scored in 11 consecutive games breaking a record set by Dutch hitman Ruud Van Nistelrooy. When I compare Vardy directly with Robbie Fowler though, my head takes over from my heart. Fowler was an absolute force of nature in the 95-96 season. This season Vardy has only scored in the Premier League while Fowler was rampant across four different competitions. Robbie Fowler is a criminally underrated English striker with a brilliant goal scoring record. At that time Fowler was 21, while Vardy is now 28. A definite plus point for the Liverpool striker. However, as good as Fowler’s statistics are it’s not enough to take him past the Cinderella story that is Vardy. I can’t choose between them so it’s a draw.

Les Ferdinand had a great club season for Newcastle but for England he was the spare, only used when Alan Shearer was absent. At times he was given games out of pity which did little to raise his stock. Later when Shearer joined him at Newcastle they combined to devastating effect. It makes you wonder what could have happened if they were paired together more for the national team. Daniel Sturridge is a better all round talent than Sir Les and when fit and in form he commands a starting place for club and country. However, Sturridge hasn’t been consistently fit for two seasons so it’s hard to pick him over Les after his 29 goal haul in 95-96. Since Sturridge’s return from injury we’ve all been saying: “Damn Daniel” and he’s been back at it with the great goals. Unfortunately for Sturridge, Les Ferdinand takes this one but it’s more by default than anything else.

In what has been a disappointing season for Wayne Rooney it’s still tough to look past him. Teddy Sheringham cemented his place alongside Alan Shearer as a starting striker for England. His class and creativity at Tottenham in 95-96 lead Teddy to critical acclaim and 24 goals in all competitions. The partnership he forged with Shearer was a joy to watch, his guile and Shearer’s power was poetry in motion. That said, whether you like Wayne Rooney or not it’s hard to ignore his achievements up till this point. Rooney is the second highest scorer in Premier League history and in the lead up to Euro 2016, Rooney became the top scorer of all time for England. He’s done this while playing a lot of games as a support striker behind a bigger man, similar to Sheringham. in 1996, Sheringham turned 30, just as Rooney has done recently. Rooney’s achievements surpass Sheringham’s in their 30 years. The England captain wins this one.

So there you have it, the Euro 96 squad beats their Euro 2016 counterparts by 7 points to 4. However, with a fit and firing Daniel Sturridge it could all have been so different. Let’s see how the ‘three lions’ do in Euro 2016. If the victory over Germany is anything to consider, the England strikers are in for a good tournament.

‘Teams I Hate in The Spotlight’ – England