When Chelsea were in free-fall in the late, dark days of Jose Mourinho’s second reign, we would record our podcast and each week the same questions would arise. How were the side that won the title in May so unfathomably bad now? We asked the biggest Chelsea fan we know to tell us what on earth was going on. Here is his answer. Part 1, at least. Get a cup of tea and settle in. Faisal Pasha goes deep.

Note: This was written after the Chelsea vs Leicester game of  December 14, 2015

I’ve no idea where to start. Such is the current malaise that I have been visiting the Chelsea website since the early hours of dawn repeatedly destroying the F5 button, dreading the inevitable P45 report. The season is in absolute crisis, the club is in shambles and I fear it will only get worse before it gets any better.

Let’s start with the players. Remind me once more, was this the same team that won the league by a landslide last season? I was flipping through articles from last season in the Telegraph, with the front cover titled ‘Chelsea – Invincibles’ (a feat that in the modern era will never be repeated, credit to Arsenal for that but our Premier League 95 point record tally in season 2004-2005 was much better), but wait a minute here, how on earth did Chelsea arrive at where they are today?

The dressing room has lost its cohesive group of leaders – players who would bleed Chelsea notably from Mourinho’s first spell. Once upon a time we had a spine. The lack of players of the calibre of Cech, Lampard, Ballack and Drogba means no one has the ability to motivate this current Chelsea side. John Terry clearly cannot do it on his own and when subbed off, the closest one is Ivanovic who is still probably chasing his man on the flank from early days this season.

The goalkeeping situation. Seriously there must be an Arsenal fan with a voodoo doll. First we sold Petr Cech (against Jose Mourinho’s wishes) and then our number one in Thibaut Courtois decided to get injured until December. Asmir Begovic did an admirable job but losing Courtois – easily considered one of the best in the world, who built that communication with his back four, and who is a world class shot-stopper – for half the season undoubtedly took its toll.

Not to discredit  the efforts of both goalkeepers, let’s focus more on our lethargic back four. Oh how I miss the days of Ferreira, Carvalho, Terry, Bridge/Gallas. Remember that back line that broke the Premier League record by conceding 15 goals all season in the best league in the world? Yes, it seems like centuries ago.

Let’s start with the right back position, a joy for every left winger in the galaxy. Mr. 2-goal Ivanovic, from legend at Anfield to decisive winners against Napoli in 2012 and Benfica in 2013, his fall from grace has been a pain to watch. One thing he has achieved this season is being constantly horsesh*t, being caught out in advanced positions on numerous instances, missing the majority of his tackles and offering nothing when joining the attack.

On several occasions he has been found guilty of giving the ball away, piling pressure on his colleagues who have to fill in as he aimlessly decides to join the attack and failing majorly whilst doing so. Time and again this season teams have targeted Ivanovic whenever he has played, from Jefferson Montero to Steve Naismith to Anthony Martial running rings around him, his presence on the pitch and name on the team sheet realises our worst fears, which are 90% correct at the end of games.

John Terry has been one of the best defenders this league has ever produced but with age catching up, we cannot rely on him to play 40 games on the trot. While his game has never been about pace, his strength, awareness at the back, tackling, man marking, communication with those around him – amongst other traits – are second to none. But, as time passes by and age catches up, we need to commence looking for our next leader.

Kurt ‘Happy’ (yes that is genuinely his middle name) Zouma is still young and has done well following his move from Saint Etienne, regarded as the new Marcel Desailly in French media circles, he is very versatile, filling in occasionally in midfield last year. This season he has been one of our better players at the back, though that is not saying much given the number of goals we have conceded. Whilst his last ditch tackles against players with pace are a joy to watch, he still has to iron out parts of his game and needs guidance but with such an erratic back line, others need to help themselves before they decide to help him.

Mr. Happy was rather unhappy at his performance against Leicester, and had another torrid outing against Newcastle. Let’s take an example of defensive lapses in a game midway through the season, where we can eliminate the ‘still early in the season’ nonsense theories. Look at the amount of space that was afforded on the first goal at Leicester, with Zouma was just static, looking upon the best forward in the country running past him into acres of space between himself and JT and putting the ball past a hapless Courtois. The worst part was Zouma admitting prior to the game that both player and manager had discussed such a scenario, and had trained for it. But either instructions were not remembered, or the players did not wish to listen to their manager.

Azpilicueta, who was in the team of the year last season and arguably the best left back in the country was sent fetching a hotdog by Mahrez – an absolute revelation in this Leicester side this season – not once but twice. Whilst defensively strong, his lack of a left foot while attacking from that side is frustrating as he always looks to bring the ball onto his right before crossing, and especially when we spent 25m Euros last summer on Baba Rahman – an Emenalo buy (rumours say Jose wanted Coentrao – a Jorge Mendes client; always thought Ricardo Rodriguez would have been a better buy, myself) and despite a good season with Augsburg, he has struggled to adapt given the vigorous demands of the Premier League. Mourinho did not seem to favour him, primarily because he trusted the back line which won him the league last year. I would have loved a natural left back with more experience in Europe taking over with Azpilicueta moved to his natural right. 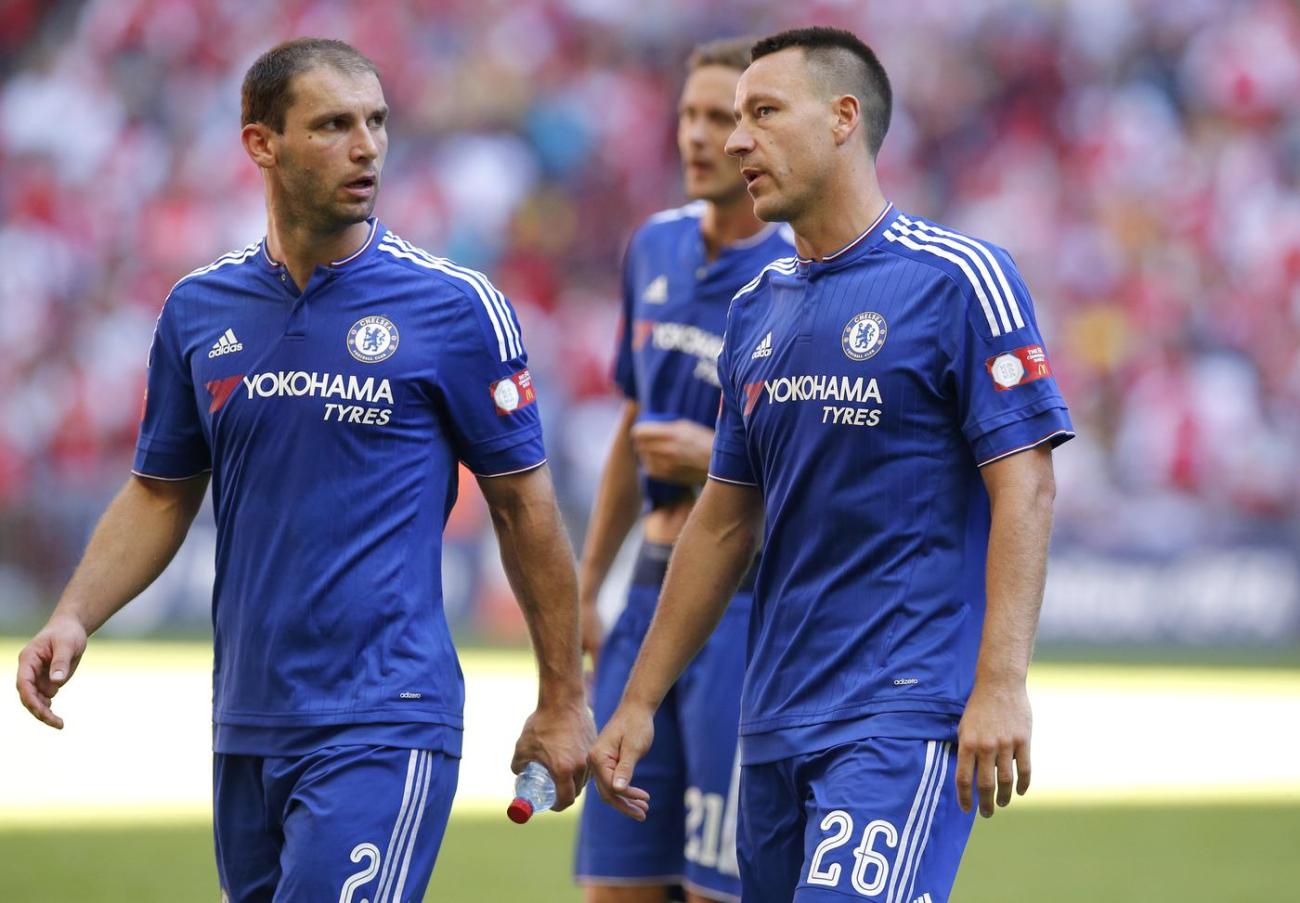 Let’s address the middle of the park. I remember meeting Fabregas over the summer tour in Montreal and we casually asked him “where is your magic hat?” I recorded him on video saying “it is at home resting”. Seems like he meant it literally!

Technically one of the best in the game, a major reason for winning the title last year, the first Premiership title in his career, Cesc has suffered a major dip in form since January 2015 and historically his numbers have suffered at all his former clubs in the second half of the season. Unfortunately when Cesc suffers, Nemanja Matic who plays alongside him in the pivot invariably suffers because Fabregas has this tendency to move forward that leaves a gap in midfield, and all of a sudden you get exposed on the counter and boom – with this Chelsea side the opposition just have to attack us and we look petrified.

The midfield’s ball retention stats have taken a battering as well – the passing accuracy for two players who were a constant fixture last season and considered one of the best pivots in the world are abysmal. Fabregas – a product of La Masia where keeping possession of the ball and all that tiki-taka bullsh*t are key traits of every player groomed out of their academy, has had the ball taken off him on numerous occasions far too easily this season and has possibly played more misplaced passes this season than ever in his career.

Matic, with numerous accolades at Benfica and his game having taken a meteoric rise has experienced an equally stunning fall from grace. That too for a side who knew how to park the bus, airplane, etc. – absolutely shut down the game, coached under Jose Mourinho who mastered that in his first spell at Chelsea. Nowadays we cannot defend against a pub side. It’s like they have lost all their qualities overnight, and it doesn’t make sense for a team that were champions only seven months ago.

End of Part 1. Look out for Part 2 shortly, in which Faisal Pasha examines Chelsea’s struggling strikers, the club’s creaking hierarchy and finally the Special One himself, Jose Mourinho.

What Happens in SW6

Jose Mourinho – The Delusional One