Throwdown Thursdays: Madrid from A to Zizou

So, the inevitable has happened. Perez has sacked Rafa Benitez and employed in his stead, Zinedine Zidane. The Frenchman left a lasting impact on our childhoods with his unique talent as a player, but will he be able to create a legacy as a coach? Bernie and Alex discuss…

With Perez at the helm, is Zidane already destined to fail?

Bernie: Yes, we all know Perez’s policies are flawed. Selling Angel Di Maria and bringing in James Rodriguez based on one World Cup was mystifying but typical. Not strengthening what looks like a soft defence and obviously firing managers at the first sign of trouble, more typical Perez. There’s no way Zidane can turn this team into the dynasty that Perez craves. It never actually happened when Perez ushered in the the first version of the Galacticos with Zidane in the team, so I don’t see any way he can succeed. It’s a poisoned chalice, best to put the cup down.

Alex: At Real Madrid, there are no successes, just degrees of failure. If you can win the Champions League and get sacked, win the league and get sacked, be loved by the whole squad and get sacked, what constitutes success? In that respect, every Real manager is destined to fail, because the club simply doesn’t trust managers. Add this to the fact that this Barcelona are phenomenal and Atleti look back to title-winning form, and it will be tough for Zidane to win a trophy this season. Overall, though, I think he has the chance to do relatively well.

Bernie: If by relatively well you mean 3rd in La Liga and UCL semi-finals then clearly Rafa Benitez was definitely on course for that. Maybe instead of changing managers, the Real supporters should do their duty and vote Perez away.

What must he do differently?

Alex: Easier said than done, Bernie. Perez fiddles the elections rules a lot to make sure he is hard to vote out. What must Zidane do differently? We don’t really know anything about his managerial ability, but when it comes to clubs and players at the most elite level, a lot of things take care of themselves. I wouldn’t expect any huge tactical or philosophical changes – this is more of a man management and team morale project than anything. Zidane has the respect of the players and fans and that will give him a short grace period, but hopefully his time as Ancelotti’s assistant will have taught him how best to manage the squad’s enormous egos. That, really, is the main task. If he can keep the players happy, Real will win games.

Bernie: First and foremost as we alluded to, Zidane must win this league. That’s a something no Real manager has done since Jose Mourinho. I agree that Zidane has to be a “player’s manager”. The only way he’s going to get the best out of these guys is if they like him. However, he also has to get ruthless and the players have to respect him. As you said, his time as one of the greatest players will earn him a grace period, but in this team you have players on huge wages with even bigger egos. He’s got to be ruthless. For example if Gareth Bale is out of form he must be dropped for Isco. This will be tricky but he has to find the right balance.

How does he get Benzema, Ronaldo and Bale firing again?

Bernie: Simple. Look at what Barcelona do. Let them do whatever they want on the football pitch. Ronaldo may be a selfish prick but his assist numbers over the years put him in the upper echelon of the world elite in that regard so he knows he needs the other two guys. The problem is what to do with Benzema and Bale. A rotating attack where none of them are given fixed positions should suit their skill sets. What this means is, a centre midfield trio that is solid and able to get them the ball is paramount. Go with Modric, James and Casemiro. Modric and Casemiro would provide a solid base to build on with Modric supplying the guile and Casemiro the grit. James can drift between the lines centrally a little bit like Iniesta at Barcelona. What does this mean for my pride and joy Toni Kroos? Sell him to the guy who gave him his big break, Louis Van Gaal of course. 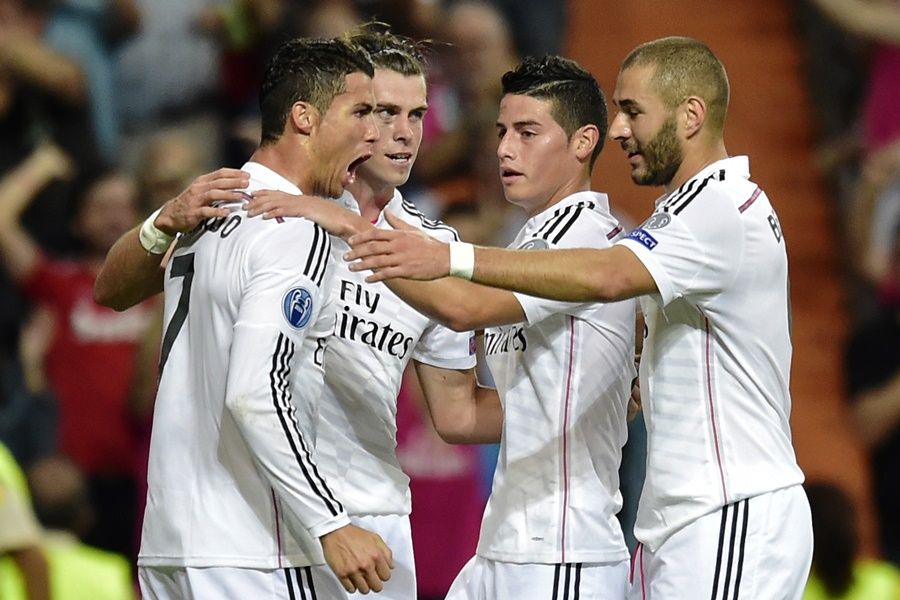 Alex: I agree. We know that Bale wants to play through the middle, but that unbalances the whole side. It has to be Ronaldo left, Bale right and James or Isco in front of Modric and Casemiro. The latter is critical in a team so bereft of defensive-minded players. The main thing Zidane needs to do is make the players more cohesive and a unit on the pitch. Less space between the lines, more awareness of defensive responsibility, more tracking back, more closing down. Harder work, basically. Tough to do with some of these players, but necessary.

How long will he last?

Bernie: I don’t anticipate Zidane being the manager by August. He’ll get to the end of the season, win nothing and get sacked. If Perez has any brains he’ll approach Unai Emery or Mauricio Pocchetino to take over. Goodness knows he’ll set them up to fail as well.

Alex: Tricky one, this. I think the fact that Zidane only has half a season this time around may save him in the summer. We must also take into account that Perez loves him. This isn’t just business. The president trusts Zidane – he took his recommendation in signing Isco, for example. Perez sees Zizou as his best ever signing, and a symbol of success. He paid the Frenchman to basically hang out at the club for a couple of years and do sod all before Zidane decided to do his coaching badges. It won’t be easy for Perez to sever the ties that bind, this time. I think Zidane will get the rest of this season, and probably a chunk of the next one.

James Rodriguez – Flavour of the Month