Juventus have a rich history of success but after the Calciopoli scandal of 2006 saw them relegated to Seria B, they needed to restructure and rebuild. As we have discussed on recent podcasts, nearly a decade down the road, Juve are the undisputed kings of Italy and are once again back amongst Europe’s elite clubs. The question is, how did they manage it? In an era in which Chelsea, Manchester City and PSG have bought their way to the top, what is the business model that has allowed the Bianconeri to flourish? Here is @Juveenio to tell us more. Follow him on Twitter for all things Juventus and The Azzurri.

Last season was nearly Juventus’ greatest ever campaign. What made it even more remarkable and surprising is that it was a season in which there were both internal and external factors working against them.

The off-season saw the unexpected departure of their emotional leader and manager (and former club captain) Antonio Conte. After two consecutive seventh place finishes before he took over, Conte is widely credited with the resurgence of the team.  If his departure came as a shock to fans, the aftershock was the appointment of Max Allegri, the recently fired manager of the flailing AC Milan. A man who had mocked both Conte and Juventus. The fact that this failed outsider was replacing a club legend did not sit well with the fans. As a fan myself, I questioned the appointment. Others were more vocal and demonstrative as Allegri’s arrival was met with a gauntlet of eggs, kicks and spits being thrown at his car.

With Conte gone, I was expecting this to be a transition year, and would have settled for a spot in the top three. Instead, the result of Allegri’s appointment was a fourth consecutive Serie A title, the much anticipated 10th Coppa Italia and a place in the 2015 Champions League final. Luckily, there are more experienced people running the club than myself and any number of fans.

As I so often do (sometimes to the annoyance of those around me), I started to analyze the team and how one piece could be substituted for another without missing a beat. The more I examined it the more I realized that Juventus is run more like a business and less like a rich man’s toy. Gone are the days of Serie A being the dominant league and its constituents being the richest clubs. When you are no longer the wealthiest, you cannot afford to make mistakes. Errors in the 30m Euro plus range are now the purview of the English teams and a few others scattered throughout Europe. Juventus is a well run business, and aside from a few exceptions, a team which is being run as a business in a league in which most owners are still running theirs as fruit stands.

I would like to consider myself a student of business and therefore look to study the most successful at their trade. I think that without good leadership creating, executing and adhering to a plan, that an organization will not be able to reach its maximum potential regardless of the talent at its disposal. Perhaps the preeminent authority on leadership is Jack Welsh, Chairman at General Electric for 20 years. He said that is it not a leader’s job to have all the right answers, it is a leader’s job to ask the right questions and then surround himself with intelligent people so that they may find those answers. Steve Jobs once remarked, “It doesn’t make sense to hire smart people and tell them what to do. We hire smart people so they can tell us what to do.” 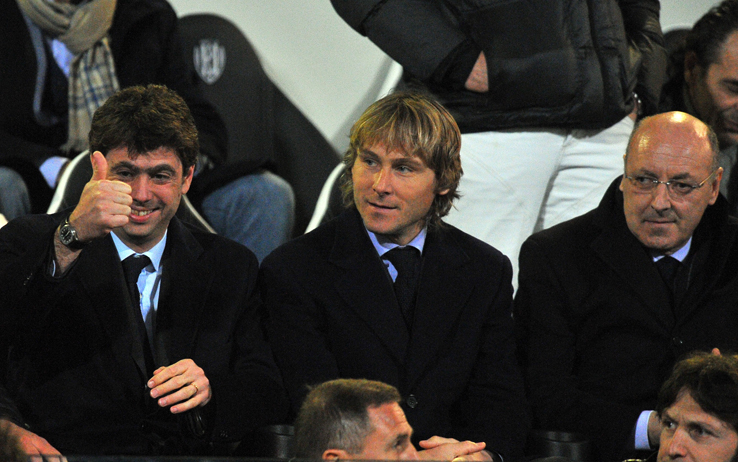 This turnaround at Juventus started from the top, John Elkann. The man has been burned in effigy countless times, probably due to his style. His quiet personality is misinterpreted by many as a lack of passion or intelligence. I would caution against confusing the two. Elkann appointed the right person to run the team, his cousin Andrea Agnelli.  If you listen to Agnelli speak you will hear a more professional tone befitting that of a corporation as opposed to the ad-hoc responses you get from the majority of team owners. I ask myself, if these owners were in another business and spoke of their competitors in such a way, would they not be fined and sued repeatedly?

Agnelli realized that Serie A is a brave new world, and no longer the most desired destination for talent. Serie A and Juventus needed radical change. The first part was the construction of Italy’s first privately owned purposely built football stadium. I heard it remarked that it was the best stadium the Italians built since the Coliseum. Agnelli put a team in place to increase revenues from sponsorship which – starting in 2015/2016 – will see Juve have the richest shirt deal (primary and technical) in Serie A.  In addition, the team brought in additional sponsors and is expanding their global brand via touring, social media etc.

However, fans love a winning product and without a good product on the pitch, all the other efforts become futile. Agnelli hired Marotta and Paratici to help build a competitive team that would once again ascend to the top of the game in Europe.  It’s interesting to note that Conte was Agnelli’s choice, while Allgeri was Marotta’s choice. Agnelli could have vetoed the appointment, but had enough trust in the smart people he hired to accept that decision. Marotta and his team still needed to prove themselves to Agnelli, however. It was very much a case of “I’m giving you the opportunity to prove yourself so that I can trust you.”

Marotta and Paratici earned that trust. In their five years with the club they have brought in four consecutive Scudetti, two Italian Supercoppas and one Coppa Italia. They built a deep team of talented players (many of whom are sought after) through a series of shrewd dealings; free transfers, loans, co-ownership of young talent, hidden gems at low prices. This team has not only returned to the top of Italy and Europe (despite earning much less than its European contemporaries) but has done so within the confines of Financial Fair Play.

It is said that the only constant in life is change. The same can be said for business. I think about Kodak. For over 100 years it was synonymous with photography and was the preeminent name in film. Today it’s extinct as the world transitioned from analogue to digital. Part of Kodak’s problem was that they saw themselves as a film company, so when the digital revolution arrived they were not prepared; either though ignorance, arrogance or denial, but regardless, they were not prepared. Had they thought about what photos mean to people and the new way in which they were being shared, Kodak could have become Facebook or Instagram. Serie A is filled with relics and aside from a select few, most teams are still trying to sell film instead of adapting their business model. Roma, now American owned, are following the Juventus model and will continue to do so. Their fans should be patient, and will be rewarded. On the opposite side, AC Milan with the old guard is still operating in the mid 2000s and the business landscape is passing them by.  Galliani is trying to make deals over the dinner table while Marotta is making them in the boardroom (see exhibit Kondogbia).

Transitioning to the new model is not easy, nor is it fast. Patience and discipline are necessary. The first step is having a good plan and then adhering to it, shutting out the noise around you that may cause you to deviate. Juventus were heavily criticized for not being able to sign a big player for a few years, but management was not concerned with the criticism. They had a strategy and adhered to it. Slow growth and prudent buys brought success, success attracted bigger names and finally the team won more often. A club should not always give the fans what they are asking for in the short term, but give them what they want ultimately, which is a winning team. Between wanting Del Piero to stay and being upset at missing out on the likes of Cavani, Aguero, Dzeko, Sanchez, Rossi, RVP, etc., fans were left thinking that the team would not be able to compete at its historic levels. In 2014/2015 the fans did not get what they asked for, but they did get what they wanted. I will concede that some will say not winning the Champions League made the year unsuccessful but then again, you cannot make everyone happy.

In Jim Collins’ book From Good to Great he examines why similar companies of similar size don’t grow in the same way. Why one fails and the other succeeds, for instance Wal Mart and K Mart. One of the criteria he uses is how an organization defines leadership. While a leader is vital, there are two schools of thought. The first is the leader who needs to control every aspect of a company and in whose absence everything would fall apart. The other type is the one who empowers his or her people to make decisions so that even in their absence, business continues to run.  For the latter, one puts their ego aside. In Serie A there are a lot of ego maniacs, Berlusconi of AC Milan, Zamperini of Palermo, Lotito of Lazio and DeLaurentiis of Napoli to name a few. Juventus went the other route. Agnelli allowing Marotta to select Allegri demonstrates unequivocally that they empower their people to make the right decisions.  The club does not put too much power in any one person’s hands, which guards it against collapse if that person departs.

So, Juventus, the team which has been in the hands of the same family longer than any other professional sports franchise in the world – and at one point was the greatest toy of Giovanni Angelli – has changed with the times. His grandson and nephew run the team like a business; fiscally responsible, within the constraints of the environment and growth is organic through business means. Some might argue that this is the wrong way, and that the old way is better. It’s a debate in which I would be interested, but I look at the facts. As an organization it has been the class of the league for four consecutive years and the results are showing on and off the pitch. I am also a proponent that good competition increases quality and I welcome the development of Roma and perhaps soon the resurgence of the Milan teams. I am looking forward to the upcoming season with great anticipation.

What happened to AS Roma?