Earlier this season we spoke with Cathal Mullan of LazioLand about his team’s signing of Ravel Morrison. He provided brilliant insight then, and now, at the end of the season, he’s provided us with a wonderful look back at Lazio’s most thrilling season in years, including *that* final game against Napoli. Read on:

The 2014-15 season was always going to be the beginning of a new epoch for Lazio with Stefano Pioli taking charge at the club and tasked with navigating Lazio back into European competition. Edy Reja had left the club for a second time at the end of the 2013-14 season despite having another year left to run on his deal. He felt the club would benefit from a change of manager which would in turn bring about a much needed change in the club environment.

In recent years, Lazio have been a club that has tended to go from one extreme to the other but the conditions were perfect for positive change. The hardcore fans spent the entirety of pre-season sitting on the fence, pondering whether to continue protests which had now deviated from their original purpose of liberating the club from Lotito, but the early signs of the pre-season campaign had been encouraging and it was a case of if not when the fans would get back on side.

It may have taken 10 years, but President Claudio Lotito discovered the club’s coffers and provided Director of Sport Igli Tare with long-desired funds. The capture of the Serbian pair of Filip Djordjevic and Dusan Basta was met with indifference, but the signing of Marco Parolo was a real crowd-pleaser and Stefan de Vrij’s signature sent fans into a frenzy; a frenzy which caused many to overlook, albeit reluctantly, the failure to sign Davide Astori.

Pioli couldn’t have had an easier start to the season as his Lazio faced Bassano Virtus in a round of the Coppa Italia that we were no longer accustomed to playing in. Looking back, there is perhaps no game this season that embodies the current Lazio more than this 7-0 thrashing. Lazio spent one half controlling possession and knocking on the door to no avail, then spent the other half scoring goals for fun, as if it had become impossible to miss. You might say every team has games where everything goes in your favour and then games where nothing goes in your favour, but Lazio have taken that phenomena to new heights this season.

Lazio dominated the opening four games of the league campaign but emerged with only three points, secured in a home win against Cesena which on paper at least appeared to be the easiest game of the season. Had Lazio emerged with twelve points, few could have complained, but now Lazio and Pioli were in a precarious position. Lazio’s style of play had won over many fans but Pioli was making disbelievers of his doubters with less than satisfactory results. Journalists were beginning to hint that time could be running out for Pioli despite the fact Lotito has more patience with his managers than his managers have with him.

Pioli need a result and the result – and turning point of Lazio’s season – was a 4-0 humbling of Palermo at the Renzo Barbera. It was – ironically – Lazio’s weakest display of the season to date as the home side could’ve beaten us several times over with the chances they created, but Filip Djordjevic’s ruthlessness in front of goal was the difference and it sparked Lazio’s season into action. Candreva and Djordjevic had a run where the former would supply the latter and the latter would make the net rustle, and Lazio accumulated 13 points in five games.

Lazio then came undone in Empoli falling victim to organised set plays and Juventus added insult to injury after the international break in November with a clinical 3-0 victory on our own patch. Fresh questions were now being asked of Pioli and his squad and the answer was Felipe Anderson. Galvanised by a call-up to the Brazilian Olympic team, the man for whom hope was beginning to fade stepped up to the plate. A Coppa Italia encounter against Varese was the introduction he needed to find the type of form that put points on the board either side of Christmas. 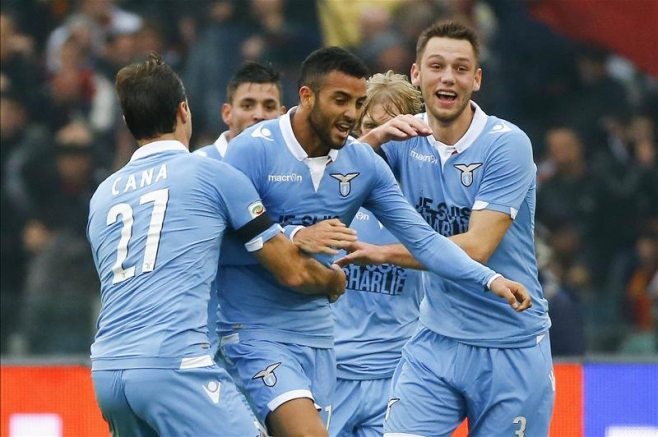 Napoli brought Lazio back down to earth with a victory in the Stadio Olimpico that truly exposed Stefano Pioli for perhaps the first time in his Lazio career, and an inexplicably bad performance in Cesena followed by Genoa’s extension of their ridiculous winning-streak over Lazio left fans fearing the worst. Lazio had gained a reputation for fading away in the second half of seasons but without European competition to contend with this time around, many believed we should be breaking that stigma.

And break that stigma we did, although few could have imagined that we would do so by racking up eight league wins on the trot and progressing to the final of the Coppa Italia at Napoli’s expense. Felipe Anderson returned from injury and a short trip in Brazil following well-documented family problems to pick up where he left off and the sense of the achievement was heightened by the local factor as Antonio Candreva returned from a brief spell on the sidelines to find that another Roman in Danilo Cataldi was rivalling him for the affection of the Curva Nord. Stefan de Vrij was beginning to emerge as a leader in defence following a shaky start to his Lazio career and Miroslav Klose was rolling back the years in attack, marking himself out as, statistically, the most lethal finisher in Europe.

Lazio were riding a wave of enthusiasm, but Juventus were on hand to sow seeds of doubt into the Champions League dream and it initiated a hangover period. Lazio’s games with Chievo Verona have been unpredictable over the years but Alberto Paloschi’s equaliser was a bolt out of the blue and the first of many blows to our ambitions. Edy Reja and Giuseppe Biava returning to Rome and taking points off us was difficult to swallow, but what left the bitter taste in our mouths was the one-two Hernanes served up, complete with somersault on the side.

With Sinisa Mihajlovic on hand to welcome us to Genoa, you could be forgiven for thinking the script was written for him to put several more nails in the coffin, but the fairytale was reserved for one of our own. Santiago Gentiletti – sidelined for eight months with a serious knee injury – made his return to the Lazio eleven and scored the winner to set up a Champions League play-off in the Derby della Capitale.

When the fixture list came out, the optimists among us looked at that Week 37 encounter with Roma and hoped Champions League qualification would hinge on that game – and some of us may even have thought Juventus had a shot at making the Champions league final – but none of us envisaged a rescheduled Juventus – Lazio cup final would take place days before the Derby della Capitale. The domestic cup final is the pinnacle of almost every team’s season. For Juventus, it paled in comparison to other games in the season. For Lazio, it wasn’t even the biggest game of the week.

It was, however, Lazio’s proudest moment. Yes, we lost, but it will be remembered as the Coppa Italia that was decided by centimetres. Djordjevic’s extra-time effort hit both posts and came out seconds before a bobbling Alessandro Matri shot just about caught out Etrit Berisha.

The Derby della Capitale was the moment to forget. Having lifted the Coppa Italia in Roma’s faces two years previous, Lazio came into this game as slight favourites despite a one-point deficit. Rudi Garcia parked a bus so big it would make Mourinho’s eyes pop out of his sockets with delight, but Lazio could have few excuses for an almost unforgivably uncharacteristic performance. And so, the final Champions League qualification would go to either Napoli or Lazio and would be decided on the final day as Napoli welcomed Lazio to the San Paolo. You couldn’t write it.

Ups and downs and then ups again. Every season is a rollercoaster with Lazio, but this is one journey no one wants to come to an end. With a place in Champions League qualification, we’ll ride it out for another few months at least.