Into the final three games of the league season and the champions are a foregone conclusion. Are Chelsea really boring or should we be inspired by their grit? The old adage “offense wins games, defense wins championships” could have some meaning, here. Then again, could we argue that a team with that much talent should be doing more than being gritty? Ultimately, time will remember the results and the winners, not the performances, not the losers. Who else will end up a winner on the final day?

Southampton v Tottenham: Thrilling contest for the neutrals, with honours even.
West Brom v Liverpool: Mostly one-way traffic in this one but West Brom hang on to gain a point.
Manchester City v Aston Villa: Brave Villa almost snatch a point at the Etihad as City work for their points.
Everton v Manchester United: Everton destroy United on the counter and dent their recent confidence streak.
Arsenal v Chelsea: A dour result given the calibre of players on call for both lineups.
Inter Milan v AS Roma: An unusual victory for Inter Milan as they look to finish the season strongly.
NY Red Bulls v LA Galaxy: Red Bulls come back to get a point from this one as the season begins to take some shape. Orlando SC v Toronto FC: Jozy Altidore takes this game by the scruff of the neck with an outstanding performance. 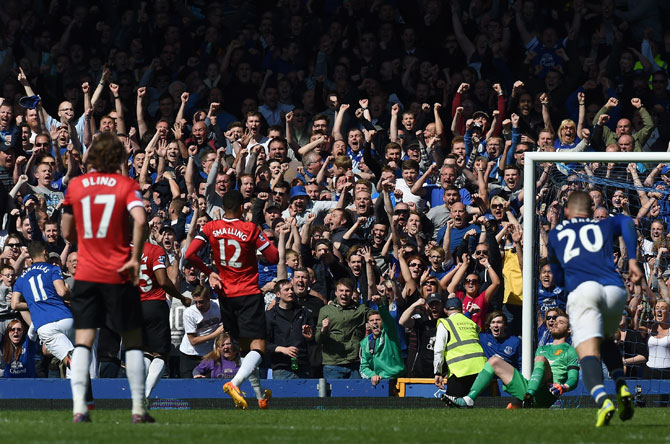 Upcoming Fixtures:  Liverpool host QPR as their recent streak of poor results has put them firmly in Europa League contention. QPR are looking to avoid relegation and could hurt the Reds if they are not careful. Manchester United host West Brom and this is a rematch of the thrilling 2-2 draw at the Hawthornes earlier this season. Chelsea v Crystal Palace is most likely a foregone conclusion barring a dismal performance from Chelsea. To be fair, no team has ever won the league so carefully and anti-climatically in a very long time. Tottenham look to break their curse against Manchester City, but City will look at this fixture and consider it three points in the bag. Hull City host Arsenal and their recent hot streak could inflict some damage on the Gunners. Earlier this season a 2-2 draw at the Emirates gave Arsenal a scare and it could very well happen again given the relegation battle’s intensity. Bayer Leverkusen host Bayern Munich. The Champions are coming off a loss against Dortmund in the DFB Pokal and will look to put that result behind them in preparation for their tie with Barcelona in the Champions League looming large. Real Madrid travel to Sevilla for arguably their most difficult fixture of the run-in in La Liga. Napoli v AC Milan takes place in Serie A, and New England hosts Toronto in a battle of the North-East in MLS. The MLS season heats up as the European season cools down. Thank the schedule-makers for providing us a continuous flow of football!

Mohaned: Liverpool vs QPR: Brendan Rogers is under the cosh. Oh yes he is. He recently, after his embarrassing loss to Hull, said that the players are playing for their future. Can you play for your future if you don’t want to be there in the first place? Anyways, Liverpool need to score. That’s it. Simple. QPR should really look at this Liverpool team and their form and believe they are there for the taking. The problem is that both these teams struggle for goals. In the end, I think Liverpool might just edge it but wont keep a clean sheet. 2-1 Liverpool.

Alexander: Tottenham vs Manchester City: Always a high-scoring affair, this one should be a lot of fun. Neither side can defend properly, and neither is in particularly great form. In terms of the race for the top four, though, Tottenham could close the gap on City to four points with a win, which wouldn’t be insurmountable with another three games left. What a dramatic finish that would be. Unlikely to happen though, as both Danny Rose and Ben Davies are out. That probably means a back four of Vertonghen (LB), Fazio, Dier, Chiriches (RB). Lord have mercy. 2-2 draw.

Bernie:  Sevilla vs Real Madrid: Sevilla will have confidence after beating Rayo Vallecano 2-0 and advancing to the Europa League semi-finals at the expense of Zenit St. Petersburg. Real Madrid will also be confident especially since they squeaked past Atletico Madrid in the Champions League quarter finals and beat Celta Vigo 4-2. Both wins were thanks to the poaching prowess of on-loan striker Javier “Chicharito” Hernandez. Sevilla need to keep an eye on the Mexican but it might be the Portuguese Ballon D’or winner Cristiano Ronaldo who they have to worry about. Ronaldo has scored more goals against Sevilla than any other with 18 goals in 12 appearances. It should be a tough match but Madrid should just have enough. 1-2 Real Madrid.

Rishay: Bayer Leverkusen v Bayern Munich:  Pep Guardiola’s expectations are so high that, after slipping up to Dortmund in the DFB Pokal, Bayern fans are ready to consider this season a failure. To be fair, Bayern have won the league without any real threat from any other team this year and should be exempt from any domestic slip ups. It is in the Champions League that they are focusing their attention and should measure their successes. Leverkusen have done admirably yet again, and could strike against a Bayern side with injuries and preparing for the CL encounters around the corner. It will not have any effect on the Bundesliga race, though. Bayern will do well to win comfortably. 2-1 Bayern.