The Bundesliga Returns: Five Things to Keep an Eye On

The Bundesliga returns to us this weekend after what felt like an incredibly long winter break, and while it’s been nice not to have to report Dortmund 1-0 losses each week, we’re pretty happy to have it back.  In this piece, German football expert Adrian Sertl tells us what to look out for in the second half of the season: Follow Adrian on Twitter at @AdrianSertl for excellent Bundesliga coverage and more.

It’s been roughly six weeks since the final whistle blew on the last competitive fixture in Germany’s top flight – a second half stoppage time strike from Hannover 96’s Joselu stole a point for the away side in a 2-2 draw with Freiburg at the Schwarzwald-Stadion. Now the league begins anew in 2015 as table topping FC Bayern travel to second placed VfL Wolfsburg. A Bayern win will put them a whopping 14 points clear of the Wolves and will effectively (barring some catastrophe of biblical proportions) end the title race…at the end of January.

You might be asking yourself “what’s the point of watching a league with zero chance of a dramatic title race?”, and that is a fair question. Well if you like goals, the Bundesliga ranks highest in goals scored per game across the big five leagues; perhaps pay special attention to Eintracht Frankfurt in this regard as they’ve scored the second most goals (34) in the league, but also have conceded the third most (34) as well. There’s also the much discussed fan atmosphere that adds an increased level of emotion to each match, especially the derbies.

But goal fests and ultras aside, there are indeed other reasons to tune into the Bundesliga for the rückrunde. Here are five of them:

FC Bayern are built to destroy. Over the past two and a half seasons the club has a combined league record of 72-10-3. Yes you’re reading that correctly, in 85 Bundesliga matches Bayern have only suffered defeat on three occasions, once each to Bayer Leverkusen, Borussia Dortmund, and FC Augsburg. In the two seasons preceding this one, Bayern shattered a whole slew of German football records and could break more (of their own) records by season’s end; in fact, the 11 point lead over VfL Wolfsburg at the halfway point in the season set a record for the widest gap by this stage of the season. Perhaps the most eyebrow raising statistic is that so for this season, Bayern have only conceded four league goals and have scored four or more goals in a game on six different occasions.

So why should you care to watch? Dominance on this scale deserves an audience. A collection of players like the one Bayern has assembled doesn’t come around very often, so it is best to take it all in while you can, or risk missing out. Conversely of course, if you’re looking for a club to actively root against, Bayern would be an excellent candidate for that as well.

It won’t surprise anyone that the above was written by an unrepentant FC Bayern supporter and as such should be taken with a grain of salt. There really are non-Bayern related reasons to keep tune in.

No pundit in German football could have foreseen what has happened to Borussia Dortmund so far this season. Bundesliga Champions only three seasons ago and Champions League finalists two seasons ago, die Schwarzgelben find themselves sitting second from the bottom, only ahead of rock bottom Freiburg on total goals scored. In fairness however, the club had been absolutely ravaged by injuries in the first half of the season and coach Jürgen Klopp has struggled to put together a consistent starting squad.

Entering the second half, and the club is near complete fitness; Sven Bender, Erik Durm, and Sebastian Kehl should all be back with the team shortly leaving only Jakub Blaszczykowski out long term. The club hasn’t been extremely active in the transfer window, the sole addition being midfielder Kevin Kampl from Red Bull Salzburg. However given the troubles of this season Dortmund’s best transfers may be the ones they don’t make; the two most talked about departures being Marco Reus and Mats Hummels, the latter having been rumoured to be joining Manchester United since just after the World Cup this past summer. If BvB are going to pull themselves out of the relegation mire, they’ll need both of those star players to do it.

All things considered it would be rather difficult to envision Borussia Dortmund actually getting relegated this season. The squad should be too good for the drop, but the hole they’ve dug themselves is a deep one. While a Champions League berth still isn’t out of the realm of possibility it would have to be considered a long shot. Realistically they will likely battle it out for one of the two Europa League places. A strong Dortmund is good for the Bundesliga and German football as a whole and it will be interesting to see how they fare in the second half of the season.

The European and Relegation Battles

While there isn’t much of a title race to speak of, there is plenty to play for in the Bundesliga. The race for the European qualifying spots is incredibly tight. Only two points separate third place Bayer Leverkusen from seventh place Hoffenheim and in between are heavy hitters Borussia Mönchengladbach and Schalke 04, as well as little upstarts FC Augsburg. The top six places qualify for Europe so it will be a dogfight the rest of the way to see who is plying their trade on the continent next season.

At the bottom, the competition is just as fierce. Four points separate tenth place SC Paderborn (a newcomer to the top flight) and last place SC Freiburg. With exactly half of the league legitimately in the relegation mix, most match days will feature several games between sides fighting over crucial points that may ultimately be the difference between staying in the top flight or being sent down to the 2-Bundesliga. The drama and intrigue of the relegation battle are magnified when you consider that interested viewers can find online Konferenz streams, where matches are simulcast and each game is joined in progress at regular intervals. Of course, if a major event does occur the broadcast is immediately switched meaning that things can get incredibly dramatic when several of these major game events happen to fall one after another. A truly immersive football experience.

The Continuing Struggle of “Big” Clubs 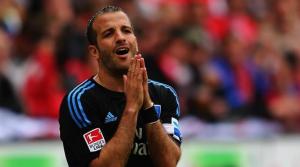 Deeply entrenched in this relegation battle are three of what most observers of German football would consider “big” clubs. Hamburg, VfB Stuttgart, and Werder Bremen are all sitting on 17 points, separated only by goal difference. All three are in real danger of losing their spots in the top flight.

Champions just over a decade ago, Werder Bremen have become a shell of their former selves. Recent seasons have seen Bremen finish in the middle to lower-middle of the table and the side’s unfortunate hallmark has been a woeful defensive record. During the past three seasons Werder have been amongst the worst Bundesliga teams in terms of goals conceded, and this season is following a similar trend. They’ve conceded 39 goals in the first 17 matches – that’s an incredible 2.3 per game!

VfB Stuttgart haven’t fared much better. Having won the Bundesliga in 2007 Stuttgart have been a complete mess on and off the pitch. Consistent underachieving coupled with instability in the managerial position have doomed this once-competitive side to mere mediocrity. Since Bruno Labbadia’s departure in the summer of 2013, VfB have made four managerial changes involving three managers, current boss Huub Stevens being the sole repeat performer. If Stuttgart do not find some vein of consistency soon, they’ll be in even deeper trouble then they are now.

Finally we come to the Bundesliga dinosaur, Hamburger SV. HSV are the only club to have played in every single Bundesliga season since its inception in 1963, and rather obviously one of only four clubs (the others being Bayern, Augsburg, and Paderborn) to have never been relegated from Germany’s top flight. This record almost came to a halt last season as they finished in the relegation playoff spot, but managed to retain their place (only barely) at the expense of Greuther Fürth. Like Stuttgart, Hamburg have struggled with managerial stability and perhaps even suffer from a “we’re not as good as we think we are” syndrome when it comes to the actual squad. Could this finally be the year that the dinosaur becomes extinct?

FC Augsburg punching above their weight

After a rather remarkable eighth place finish last season, FC Augsburg have become the real surprise story of this year’s Bundesliga season. The relatively little known club from Bavaria currently sit in sixth and occupy the final European qualifying spot allocated to Germany. Club manager Markus Weinzierl has been a real boon to FCA since taking over from Jos Luhukay in the summer of 2012. Weinzierl has created a team whose tenacity and belief in themselves are their strongest qualities. Not blessed with squad depth like many of their opponents, Augsburg are very well organized and difficult to break down.

It will be interesting to see if Augsburg can keep up this pace in the second half of the season. In the recent past, some of the smaller clubs in Germany – Eintracht Frankfurt and SC Freiburg – have qualified for Europe. While an incredible achievement, without a significant budget for player transfers or wages these teams are often not able to compete over extended periods of time. Still, it is always nice to see this kind of plucky underdog story; all of the major football leagues have one and FC Augsburg are Germany’s example of a small club fighting and so far beating the odds against them.

Enjoy the second half of the Bundesliga season!