Matchday 22, and the awards for the previous year have now been doled out. The 22nd match of the Premier League campaign is taking place and we will be right there with it. Our predictions race is tighter than ever, and it is getting tense!

Recap of scores from Matchday 21:

Sunderland 0-1 Liverpool: Superb display from Lazar Markovic to seal the points for the Reds, albeit overdue.
Chelsea 2-0 Newcastle: Normality is restored for the champions elect, the Blues now have some breathing room.
Everton 1-1 Manchester City: Good display from the Toffees and deserving of the spoils, if not for the disallowed goal.
Crystal Palace 2-1 Tottenham: Great start for ‘Pardiola’ against a dogged Spurs in a close encounter.
Arsenal 3-0 Stoke City: Another 2 goals and an assist for the fantastic Sanchez.
Manchester United 0-1 Southampton: No shots on goal on your home patch won’t win you anything. Tadic winner.
Barcelona 3-1 Atletico Madrid: Goals for Neymar, Suarez, and Messi to complete a fiery encounter at the Camp Nou.
Lazio 2-2 AS Roma: Derby de la capitale and a selfie de la capitano for the evergreen Totti.
Napoli 1-3 Juventus: Pogba volley the pick of the lot in a game dominated by Juventus. 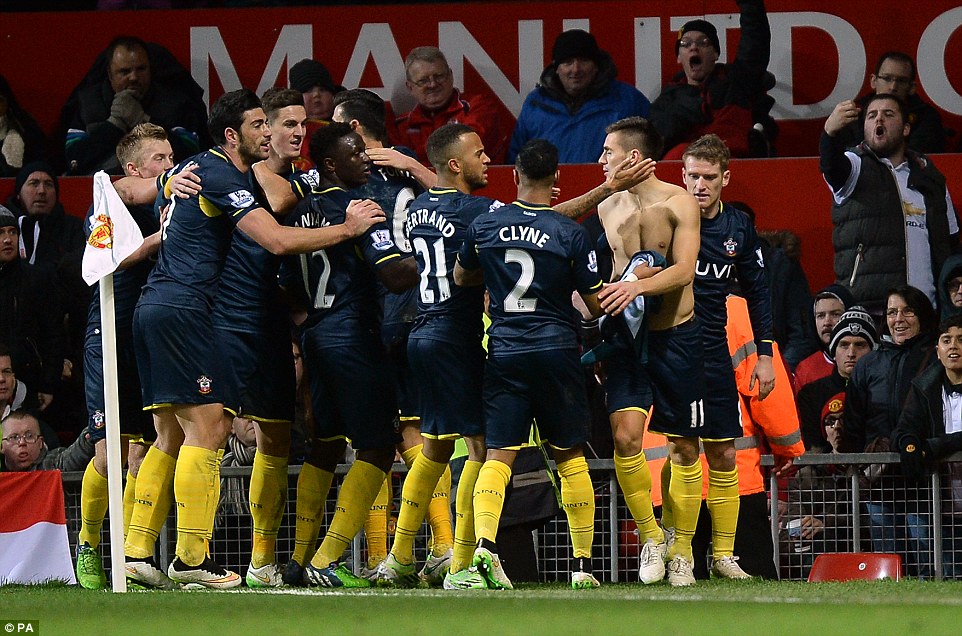 Matchday 22: Manchester City v Arsenal takes place this week at the Etihad Stadium. It is unclear whether there is an advantage to a particular side. City have just signed Bony – who is away at the ACON – but certainly have options up front, while Arsenal have Sanchez. If there was ever a moment that made greatness, we might see it here. Aston Villa v Liverpool is next, and Villa are not looking so good at the moment. Liverpool have picked up some form in recent weeks and could well find their shooting boots here. QPR v Manchester United and ironically the team under pressure in this one will be dressed in red. For the abundance of talent up front, United have wasted a lot of it so far. Swansea v Chelsea should be interesting, but without Bony, who will carry the Swans? Chelsea will win. Tottenham v Sunderland is a match on an even keel. Tottenham can’t dominate an opponent for 90 minutes and Sunderland are hard to pin down and impossible to predict. Everton v West Brom gives Tony Pulis a chance to bag another win against under fire Martinez, whose Toffees have shown signs of life in recent games. On the continent, Lazio v Napoli  – the battle of the baby-blues – will be a superb fixture to watch, with both teams capable of scoring some really good goals. Let’s get on with our predictions!

Bernie: QPR v Manchester United: QPR are struggling to find any consistency in the league, especially away from home. Their home form has been their saving grace. Manchester United are coming off a home loss and have been mediocre away from Old Trafford. This makes for a rather intriguing contest. The United defense is pathetic and QPR’s Charlie Austin may feel that it could be a good day for him. For United to win Van Gaal needs to abandon the stifling 3-5-2 formation and really let his attacking talents lose like they did in the reverse fixture using the 4-4-2 diamond. United fans are annoyed with the last few performances while QPR fans know a scalp of this nature could kick start their season. It’s going to be fun that’s for damn sure. 2-1 Manchester United.

Alexander: Manchester City v Arsenal: Manchester City haven’t won a Premiership game without Yaya Toure since April 2014. That, combined with Aguero still being out and Mangala’s poor form makes me think that Arsenal have a real shot here. That said, even with Alexis banging goals in left, right and centre, and Ozil & Walcott coming back into the frame, it would be too un-Arsenal for the Gunners to actually win this. I think they’ll come close, but fall at the last hurdle, whether that means conceding a late equalizer or failing to find the winner with the game standing on a knife edge. Will Ospina keep his place? 1-1 draw.

Mohaned: Tottenham vs Sunderland: This just got a whole new layer added to it. Will Jermain Defoe, fresh from Canada, play against his former club? Can he bring back the memories of playing in the Premier League and bang in a couple. Probably not. But hey, wishful thinking. Spurs are off a horrible loss to Crystal Palace in the league but a good win against Burnley to advance in the FA Cup. If Chadli, Kane, and Eriksen can play at their best, Spurs should have no problem getting the three points here. I’m going 2-0 Spurs.

Rishay: Swansea v Chelsea: What happens now for Swansea without their hitman Wilfred Bony? Will they be able to continue their free flowing football without a lethal finisher at the end of their moves? There are many questions to answer for the Swans and they will be desperate to get off to a good start in the “post-Bony” era. Unfortunately for them, Chelsea is the visiting team this week. The Blues are on top of the table and even though they’ve dropped a few points in recent weeks, it really looks as though they haven’t moved out of third gear. Chelsea will win. The question is whether Swansea will be able to score. 2-0 Chelsea.