It was inevitable, really, wasn’t it? As sure as Sepp Blatter’s three re-elections, as sure as Daniel Levy’s sacking of Tim Sherwood, as sure as Messi winning the Golden Ball at this summer’s World Cup…Wayne Rooney would be named captain of Manchester United. 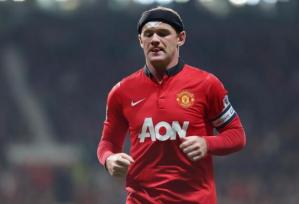 Admittedly, there is a defence to be made for Luis Van Gaal’s decision. Rooney has been at the club a long time and is a talented footballer who retains – at least commercially – a talismanic and synonymous status with the club.

We can’t pretend the pool of potential candidates is large, either. Rooney is one of only a few senior members of the squad left after this summer saw Patrice Evra, Rio Ferdinand and Nemanja Vidic depart, all of whom who’ve captained the side in the past. Ryan Giggs ascended to Assistant Manager, Michael Carrick is too quiet, Phil Jones is too young, Nani and Ashley Young too insignificant.

It has long been said that a captain must be able to inspire their teammates either through their presence, determination and oratory, or their extraordinary performances. The extremely vocal but technically limited Gary Neville is an example of the former. The shy, retiring yet infinitely gifted Leo Messi an obvious case of the latter. Wayne Rooney does not quite fit into either camp. The most vocal you’ll ever see him be is when he is mouthing off to a referee. Rarely, if ever, do you see him coaxing a youngster through a difficult moment, issuing tactical instruction to his teammates, or generally acting in any way a senior representative of his team.

“He hasn’t been captain – that wasn’t his job”, you might argue. But I’d reply that most captains are very visibly captains before they are captains, if you’ll excuse the repetition. They lead naturally. Vidic, Ferdinand, Keane, Bruce, Schmeichel…these men commanded respect effortlessly, and Rooney simply isn’t in the same bracket. There was a time, a few years ago, when Rooney’s performances might have made up for his lack of natural leadership qualities. The past two seasons though have seen him look a shadow of his younger self, despite reasonable goal contributions. Sir Alex Ferguson recognized this towards the end of his reign and began to regularly drop Rooney, but David Moyes’ lack of a spine allowed the forward back into the side, unwarranted. Since then, he has hovered in a tactically awkward limbo zone. Not quite a striker, not quite a number ten, unwilling to be a midfielder, not unfit but not match fit, not often playing terribly but very rarely playing extremely well, Rooney has been a frustrating figure to watch.

A massive contributing factor to Rooney’s less than stellar influence is that he has actively held Manchester Utd to ransom, twice now. First in 2010 when he bizarrely questioned the ambition of the club and threatened to leave (which even more bizarrely resulted in a wage increase and new five-year contract), and then again in 2013 when he became unhappy with his marginalized role in the side under Sir Alex and made it clear that he favoured a move to Chelsea. David Moyes rejected the notion and convinced Rooney to stay, but only by again increasing his wages – this time to a stratospheric 300k GBP per week – and, incredibly, allowing him some sway over transfer policy. Precedent says that every time he kicks up a fuss, he gets what he wants. Needless to say, this is hardly a healthy relationship between player and club, and the player’s actions do not merit a leadership role.

So if not Rooney, who? I already mentioned that the pool is small, but to my mind there are two other candidates.

Darren Fletcher has been named vice-captain and deservedly so. He’s been at the club since he was 15, battled through illness and adversity to reclaim his place in the team, and is a leader on the pitch through his industry.

Robin Van Persie, however, should have been the man. Senior  t 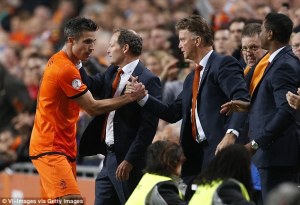 o Rooney, undisputedly world class, a favourite with Van Gaal and someone who knows exactly what his manager expects tactically, physically and mentally, Van Persie is best positioned to be Manchester Utd’s on-field guide to success. Off the pitch, too, Arsenal players raved about the Dutchman’s captaincy, saying that he organized and bonded the squad like no other. In the end, Van Gaal may have been reticent to be seen playing favourites, and perhaps Van Persie’s poor injury record counted against him as a long-term captain. It was suggested that under Moyes the striker’s attitude had not been the best, although that is perhaps understandable given the rapid transition from titans like Wenger and Ferguson to a man whose chief tactic was to whip balls into the box.

Here’s hoping that the captaincy motivates Rooney on to greater things, as it did Van Persie at Arsenal. The Englishman doesn’t deserve it, though, and that irks me.