The portable radios were out at the Vicente Calderon, Nou Camp, and Santiago Bernabeu. Worldwide, fans frantically switched back and forth between channels on TV. Not since 2006/2007 has La Liga offered such an unpredictable climax. And on matchday 37, when every match were played simultaneously, La Liga could’ve been decided.

And in all fairness, it should have. Though Real Madrid capitulated under Luis Enrique’s Celta Vigo, thus surrendering the league, their city rivals Atletico Madrid could’ve wrapped up the title at home to Malaga. The side that have arguably been the best in Spain – and indeed, Europe this season – fully deserved a win too. They would have it if not for Courtois’ rare lapse in judgment and ‘The Hand of Willy’ that tipped away Adrian’s late, late effort on goal. 1-1 the final score and Atletico then, have one final hurdle if they are to win their first La Liga in 18 years.

The contender, Barcelona. ‘More than a Club’, or more appropriately, the club with nine lives. Week after week since the tragic passing of former manager Tito Vilanova, the Catalans have looked as lethargic and devoid of ideas as ever. While it was a tough task to break down the formidable Elche defence (second best defensive record at home in La Liga this season), Barcelona seemed unaware that they were playing for a shot at the title. Tata Martino, after all, said La Liga was out of reach on matchday 35, even when it was still within mathematical possibility.

And how wrong he was. Even as Barca faltered, luck would have it that the Madrid sides stumbled too. Atletico and Barcelona’s fates would intertwine in a way that set up what promises to be the most exciting and least predictable end to La Liga in recent times.

Come May 17, the top two meet at the Nou Camp. Barca, three behind on 86 points, have to beat Atletico to win the league. Any other outcome, Atletico will become champions.

While it seems that Barcelona just cannot win lately, it would be foolish to completely write them off. Even if the Nou Camp is no longer the formidable fortress it was just a few months ago, those who have managed to take anything out of the stadium have had to play the game of their lives to do so.

Barcelona’s weakness – apart from their now infamous leaky defence – is that they have been sterile up front. Just like in the past couple of seasons, teams have worked out how to frustrate Barcelona towards the end of the season. Barcelona have once again been reduced to winning the possession battle with horizontal passes across the pitch while offering very little in terms of penetration in the final third. 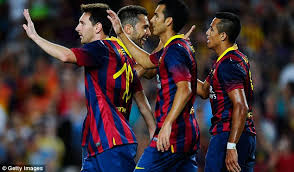 Messi, Alexis, and Pedro, Barca’s expected starters in attack against Atletico, will deliver if given the chance. The key to a Barca victory then, is in who will pull the strings behind the attack, and alongside Iniesta. Should Xavi start, expect to see slow, patient build up plays in the midfield and rarely any penetration into the Atletico area. Fabregas offers more in the way of directness and penetration, and is the logical choice to start against Atletico, but he has been woefully inconsistent in the past couple of months.

On a more positive note, Gerard Pique and Jordi Alba have recently returned to training after lengthy layoffs. Their inclusion would tighten up Barca’s defence, but it remains to be seen if they will be match-fit by Saturday.

For Atletico, everything seems in place to prevent a Barcelona victory. All five past meetings against the Catalans this season have been low-scoring, mainly due to Atletico’s ability to stifle Barcelona’s attack. Of those five, Atletico came out on top once, while the other four occasions ended as draws. It wouldn’t be a surprise if Atletico chalk up yet another draw against Barcelona on Saturday.

While you can never accuse Atletico of parking the bus, their defence is impeccably disciplined and therein lies the beauty in Atletico’s game. Diego Simeone will once again rely on Diego Godin – who is returning from suspension – at the heart of defence. Captain, Gabi, along with Tiago and Koke in midfield, will prioritise protecting the back four over going all-out attack. 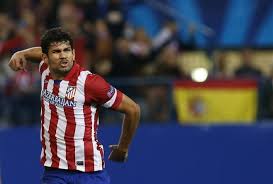 Atletico will play the wait-and-pounce game that has served them so well against Barcelona this season. They will be boosted by the possible return of star striker Diego Costa, pending match fitness. Alternatively, David Villa and Raul Garcia, with 22 goals between them this season, can both be clinical in front of goal.

Atletico’s wide players in Arda Turan and Filipe will be key in their devastatingly quick transitions. In the holes left behind by Barcelona’s attacking full backs, these players will thrive. Expect them to be involved should Atletico score.

Like the old saying goes, “whoever scores first will win the game.” Should Barca score first, Atletico will open up to look for the equalizer and that’s when the Catalans might extend their lead. Should Atletico score first, they would effectively seal the tie. All they would have to do then is to sit back and wait for another opportunity to inevitably present itself.

With so much at stake, it’s hard to imagine open attacking play from both sides. Prevention will be the best cure for Atletico and Barcelona will have to kick up a few gears if they stand a chance. The neutrals will be hoping Atletico don’t play for a draw. Last season this fixture ended 4-1 in favour of Barcelona. Hopefully on Saturday we’ll see a similarly high-scoring result either way. Don’t hold your breath, though.