Its 4:45 PM London local time. Big Ben is 15 minutes away from declaring the start of the FA CUP final. Arsene Wenger walks into the Wembley dressing room. Head held high. Suit, wrinkle free. He looks down at his squad and asks, “At 7pm, will Arsenal still be in a trophy drought?”. He expects a chorus of “no”s, but instead, all he hears are three Germans, “Nein! Nein! Nein!” Mertesacker, Podolski, and Ozil are up in arms running around the room slapping each others bottoms. “Will we make it hard for ourselves like we did against Wigan?” Arsene asks. “Nein! Nein! Nein!”. Mertesacker hits his head on a shelf. “I can’t hear you!” Arsene yells. “Nein! Nein! Nein!”. Podoslki stops for a selfie. “Louder” he demands. “NEIN! NEIN! NEIN!” A loud chanting is heard all across the hallways at Wembley. Eye of the Tiger is playing in the background, “Rising up, back on the street/Did my time, took my chances/Went the distance, now I’m back on my feet/Just a man and his will to survive”

This is how Arsenal fans might envisage the dressing room before the big game. I don’t blame them. It is after all, the FA Cup final. It’s not often that the players are as passionate about the club as the fans are, but one can only hope. Arsenal fans have been waiting for this moment for years; ever since the defeat to Birmingham in the 2011 Carling Cup final. This is the moment for redemption. The time has come where they might just stop hearing about their nine-year trophy drought. The FA Cup final will be Arsenal’s 18th appearance, equaling the record set by Manchester United. If Arsenal win on Saturday afternoon, it would be their 11th cup title, also equaling a Red Devil’s record. The only thing in their way are Hull City. The Tigers. How fitting. 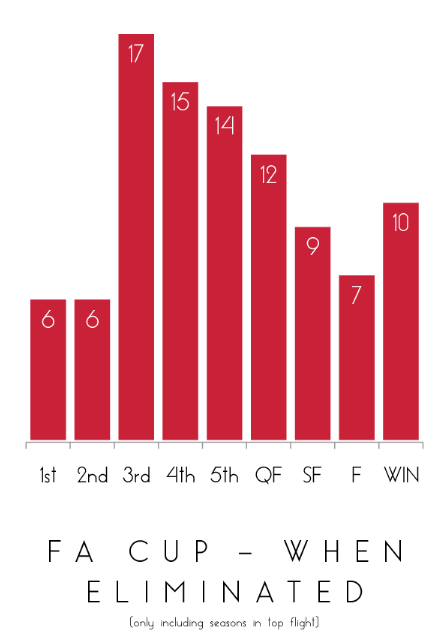 Arsenal’s 2013/2014 season brought mixed emotions to their fans. Some would say it was a much improved Arsenal; racking up their best Premier League points haul in over 6 years. Some would say their defensive stability has been a huge bonus this season; keeping the second highest clean sheets in the league. Others would point out that it was a season down the drain, one that could have been much more fruitful. Ahhh the “what if”ers. One thing is for sure, most Arsenal fans will agree that it was a season which hinged on so many little variables. What these variables are, is a topic of discussion between the Arsenal faithful; squad injuries, failure to improve the squad, and most of all, Olivier Giroud up front.

After leading the table for a whopping 128 days, it was disappointing to see Arsenal finish in their accustomed fourth spot. The title slowly slipped from their grasp and was finally conceded to Manchester City, who only lead the table for 15 days, including the last day of the season; when it matters. The season kicked off to the worst possible start; a home loss to Aston Villa. The defence looked in shambles and there was no creative flair. It probably didn’t help that the atmosphere at the Emirates was so gloomy due to the fast approaching transfer deadline, while Arsene had not yet spent a realistic penny. Transfer targets in Luis Suarez and Gonzalo Higuain seemed in the distant past. Also, Tottenham, 10 miles away, had spent 100 million pounds (no one knew at the time how badly those new players would do). As usual, the “Tottenham will finish above Arsenal and Arsenal wont make fourth” broken records started to sound. 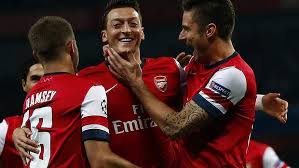 A week later, Arsenal had signed Mesut Ozil. THE Mesut Ozil. Things started to look rosy and the Arsenal style football was flowing. Mertesacker and Koscielny were striking up a fierce defensive partnership, while Ramsey was player of the season by a mile. Then, as usual, the Arsenal injuries started to pile up and players dropped like flies. February came, and the expected spring capitulation began. The fixture list became too busy and Arsenal started to face much tougher opposition in the Champions league. Dropping out of the League Cup and the Champions League in a matter of weeks, as well as losing the lead in the title race at the same time was tough for Arsenal fans. The most disappointing aspect of this slump was that no matter how much Arsenal seemed to have improved this season, they were still incapable of beating the top sides. Their record in the mini top 6 table is shameful to say the least, with some heavy drubbings along the way. Their 6-0 hammering by Chelsea and respective 5-0 and 6-3 defeats at Liverpool and Manchester City have made for some fans to call for a reality check.

STAT ATTACK: Arsene’s away record against the top 4 in the past 5 seasons is 4 points out of a possible 45.

It’s not all doom and gloom, though. Arsenal have a foundation to build on. This is the first season in a while where they will not see their best player walk out the door. Bar Bacary Sagna, no one else is leaving, while more are expected to join. Arsene has built a strong young British core in Ramsey, Wilshere, Gibbs and Walcott, which he has supplemented with some very gifted and experienced European players such as Cazorla, Ozil, Podolski and Mertesacker. Add a few missing quality players here and there, and they might have an even better season come August.

An FA Cup final victory in a few days would be the start of a new Arsenal era. With this trophy under their belt, having tasted glory, this team can propel themselves to new heights and surprise many, as they frankly have this season. The higher expectation level of this Arsenal squad was a result of their own good performances, and not pre-existing before the season started. So credit where credit is due. If, come Saturday, Vermealen can emulate Viera and lift the Fa Cup trophy, then it has to be said that Arsenal and Arsene Wenger have had a succesful season, even if only relative to the last nine. Lets not get greedy.

Enjoy this video compilation of Arsenal’s road to Wembley: