Pep Guardiola and David Moyes: The Chosen Ones

It’s April 30th 2008. Already out of La Liga and out of the Copa Del Rey, Barcelona looked at the UEFA Champions League as their last chance of a trophy that season. A tight semi-final tie with Manchester United was settled by a wonderful Paul Scholes strike. That strike was a hammer blow. Not just for the trophy ambitions of FC Barcelona, but for the managerial tenure of Frank Rijkaard as well. Barcelona had gone trophyless for two years. Rumors were rampant of talisman Ronaldinho partying too much, Deco not being happy and a rudderless club in general. Rijkaard had failed to rejuvenate an aging squad that was put together a little lazily. Something had to give and unfortunately for the Dutchman, he would lose his job. Barcelona held interviews with multiple candidates including the Special One, Jose Mourinho. Mourinho’s presentation was apparently as impressive as it was extensive. However, as we all know, a Mourinho team is defensively solid first and easy on the eye second. This likely didn’t sit well with the higher ups at the Camp Nou. With Michael Laudrup not available, Joan Laporta and company offered the job to Pep Guardiola; coach of Barcelona B. As it turned out, the decision was an inspired one. 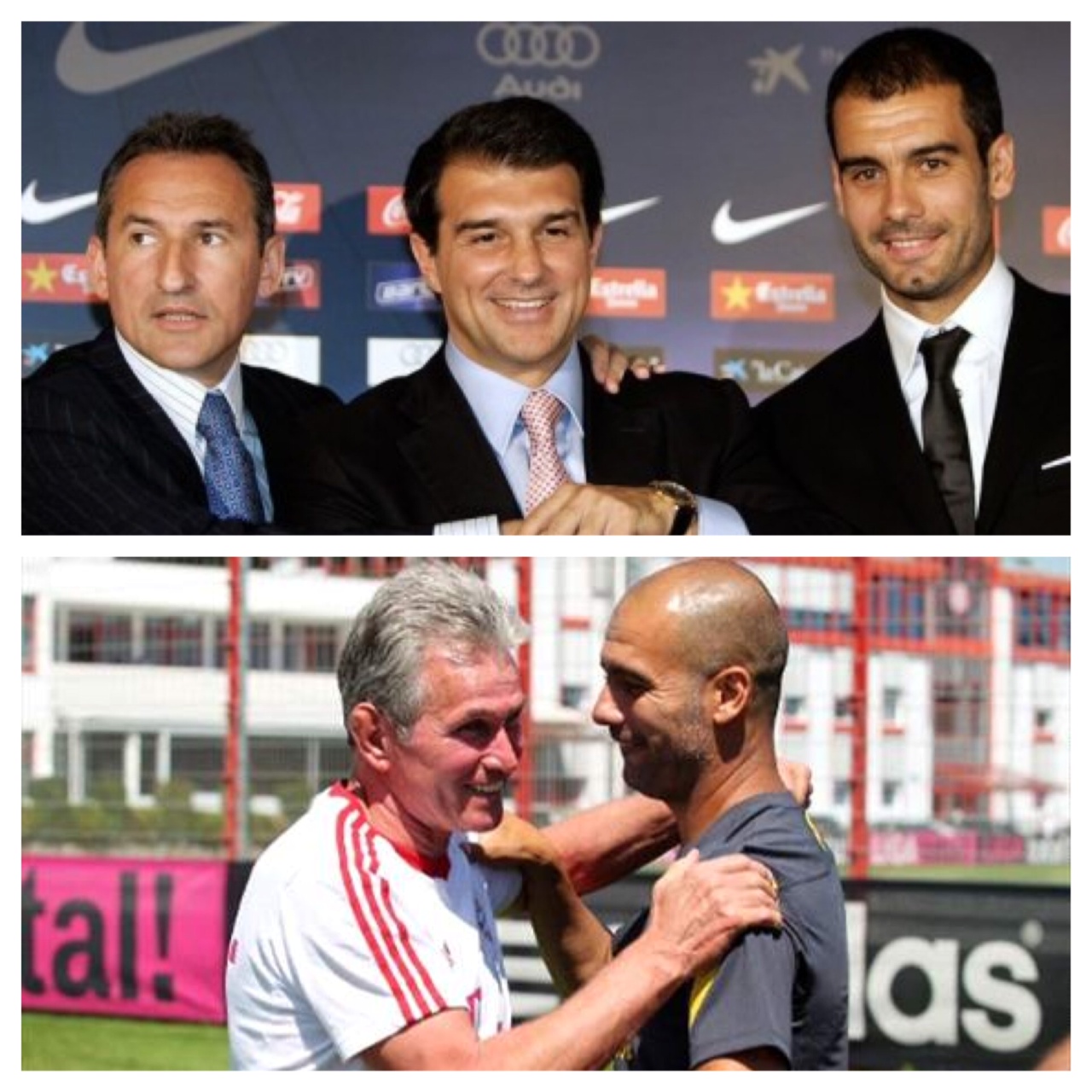 It’s May 8th, 2013 and Manchester United have just sealed their 20th league title. However, the real story of the day is the announcement of Sir Alex Ferguson’s retirement. Ferguson won 13 League titles, 2 UEFA Champions’ League trophies, 5 FA Cups, 4 league Cups and 1 Club World Cup triumph. He goes down as the greatest Premier League coach and one of the greatest managers to ever grace the sport, if not the greatest. Upon his retirement came the question: who will replace the great man? It seemed to come down to Mourinho and David Moyes. As we all know by now, the Special One was not to be the chosen one. Fellow Scot David Moyes took the job on a 6 year contract. Everyone knew that there was a decent young core with Phil Jones, David De Gea, Chris Smalling, Jonny Evans and Danny Welbeck, as well as world class strikers in Robin Van Persie and Wayne Rooney. Moyes had really landed on his feet. Or had he?

Pep Guardiola took on the job at Barcelona with a clear game plan and executed it to perfection. The man is incredibly thorough and leaves no stone unturned. Pep immediately identified the players who had to go in order to allow him to see his plan through. Ronaldinho, Deco, Samuel Eto’o and a whole host of others were seen as disposable. Eto’o couldn’t be moved immediately but the aforementioned Brazilian duo (though Deco went to represent Portugal) as well as Gio Dos Santos, Edmilson and Gianluca Zambrotta were swiftly offloaded. In came La Masia graduates Sergio Busquets and Pedro alongside big money signings Dani Alves – £23m, Seydou Keita – £12m, Martin Caceres – £14m, Gerard Pique – £5m and Alexander Hleb – £15m. Not all of these signings panned out, but Pep had taken the best of what was already there at Barcelona and added something new, something all his own. His team played an energetic, pressing game with some of the best free flowing, possession football we’ve ever seen. In the 2008-2009 season, Barcelona won every tournament they competed in. The ultimate test came in the 2009 Champions League final against the defending champions Manchester United. Ferguson’s team was seen as the best in the world at the time and Guardiola’s boys tore them apart in Rome. Pep had made it. In one season he was a legend. He would go on to another 2 La Liga titles, another Copa Del Rey crown and he would pulverize Ferguson’s Man United again in the 2011 Champions League final. Squabbles with the Barca directors and Pep’s self-confessed inability to motivate his team of champions caused the great man to take a sabbatical from the game.

Guardiola’s return to management took him to Bayern Munich, treble winners in the 2012-2013 season. Following the achievements of Juup Heynckes would be no easy task but just as he did at Barcelona, Guardiola put his signature on the club early and methodically. Out went key players from the previous season, Mario Gomez and Luis Gustavo. In came Mario Gotze, Thiago Alcantara and Robert Lewandowski is on his way next season. Pep’s ability to plan ahead, sign players accordingly and get players on board is remarkable. At the beginning of his tenure I didn’t think it possible but Pep has made this Bayern team better, and more tactically dynamic than at any point under Heynckes. They’ve broken the German win streak record and claimed the title in record time.

Twice he’s been the chosen one at a European giant and Pep hasn’t disappointed yet. What a remarkable story we are seeing unfold before our very eyes. 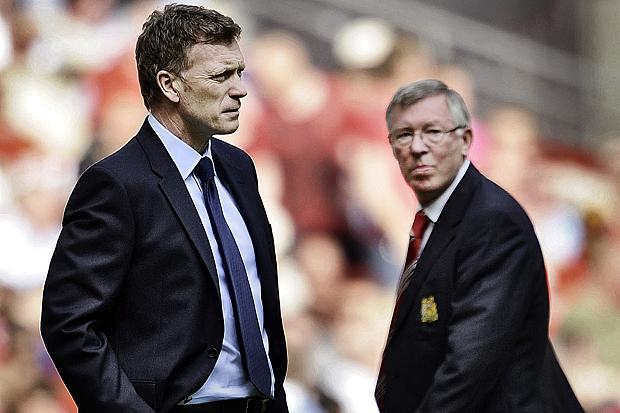 Moyes: The one Fergie chose

When David Moyes was announced as manager of Manchester United, the first thing he did was go on holiday. Whilst he was away with his family, the man must have been in a fantasy land the whole time. He’d be the manager of the best supported club in world football. A job that so many would have ripped your arm off to have, the defending Premier League champions. However, the early signs were not encouraging. Moyes is known to be incredibly thorough and detail-oriented, but this did not come through in this transfer dealings. He didn’t give himself much time to get acquainted with his squad before setting off for a tour of Asia. No real time to try new things, experiment and evaluate the squad. Where Pep evaluated his squad from a distance before taking over, Moyes did nothing, thinking the squad left behind was adequate. His transfer strategy looked more like a man reaching into a hat and picking up the first name that came up. This would have been accepted if Moyes actually signed any of them but the failed at that, woefully. Thiago Alcantara, Cesc Fabregas, Daniele De Rossi, Leighton Baines, Claudio Marchisio, Luka Modric and apparently Gareth Bale were all pursued by Moyes. What he was thinking, we’ll never know. Mesut Ozil was offered to him in August of that summer, but the Utd manager said he needed to evaluate Shinji Kagawa, and Ozil signed for Arsenal instead. Head scratching stuff, right? It got worse.

While he chased all these stars, Moyes didn’t take care of the signings he could realistically pull off. Ander Herrera’s transfer was handled with stupidity. What really happened with the three lawyers who went to Spain to represent United in those dealings, we’ll never know. Fabio Coentrao’s deadline day move didn’t go through as United allegedly didn’t finish the paper work before the deadline.  United’s only signing was Marouane Fellaini for £27.5m. That’s £4m more than they could have signed him for a month before when his release clause was still active. Manchester United were in disarray already. Moyes hadn’t even resolved the ticking time bomb that Sir Alex had left him in Wayne Rooney. Where Pep clearly had an idea of how he wanted Bayern to play, Moyes had no idea, and it has shown on the pitch. The man’s tactical impotence has been staggering. Pep has broken records for winning with Bayern. Moyes has ruined so many of Ferguson’s records its hard to keep track. United sit 7th in the league with no real chance of a top four finish. Some fans want the Chosen One banner taken down, others paid a pilot to fly a plane with a the sign saying, “Wrong One: Moyes Out” to make their point. Most, though, heed the words of the legend Sir Alex and are standing by their new manager in these tough times.

The two managers go head to head with their teams at both ends of the spectrum. Bayern Munich at the top of the tree and Manchester United on the outside looking in. Pep Guardiola’s diligent preparation has seen him lead Barcelona to unparalleled success, and he’s now improved Bayern Munich to make them the most feared team of all time. David Moyes was not prepared for the Manchester United job and didn’t make the changes Guardiola would have made in the summer to keep things ticking along. United have paid for it, and Guardiola can show Moyes just how far his United team are from the cream of the crop. If the impossible happens then perhaps the magic that Busby and Ferguson had really is with David Moyes as well. If Bayern win as we think they will and go on to retain the Champions League (a feat never accomplished), one can’t dispute that Bayern Munich chose wisely, just as Barcelona did before them.