Its the first of February already! The games are coming thick and fast. The squads will be tested especially for the clubs in the Champions League but that will have to wait. Its all about the immediate challenge on the weekend. Will the top team of the league be different come Monday night and change for the second match day in a row or will City tighten their grasp? All we can do is try and predict!

Here’s a reminder of last week’s scores and a recap of how we stand. As usual, a correct outcome warrants a point while a perfect score holds 3 points:

Bernie: Mark Hughes’ men have been up and down while United by their standards have been in free fall. An RVP and Juan Mata inspired victory over Cardiff will do much for confidence. This is the perfect game to tighten the centre of the pitch and play 4-2-3-1 and unleash Rooney, Mata, Van Persie and Januzaj together. 2-1 United

Mohaned: United have been saved! Saint Mata is here! Seriously though, its probably more that Rooney and RVP are back than Mata. United should try and keep the ball more now than they have earlier in the season. Luckily this one cant be decided by a penalty shootout … Stoke will try and be rough and tough but United should have too much quality for them. 3-1 United.

Rishay: Something tells me United are going on a streak now. They have come away with a 2-0 win at Stoke earlier in domestic cup competition, and will be confident going into this one. I wonder if Moyes will once again pick a horrendous starting eleven….I would love to see Januzaj, Rooney, Mata, and RVP, as the attacking force. Highly doubt I will live to see the day Moyes starts them all. 2-0 United.

Bernie: Both of these teams need a victory and badly. Spurs were on a good run of form until the bully that is Man City completely manhandled them. Admittedly, a refereeing blunder was the cause but still City took full advantage and then some. Hull need a win to galvanize their season and new signings Jelavic and Shane Long need to impress. It will be a tight affair and it’s risky but I’ll go with a 1-1 draw here.

Mohaned: I don’t know how to predict spurs games anymore. Recently (not so recently) spurs have been in a good run of form and are actually beating the teams below them convincingly. Hull are in a horrible patch with 5 losses in their last 6. Yes, they signed two new strikers but games are won and lost in midfield. Huddlestone’s hair seemed to be his super power. Spurs should win this one if they want to keep up the fight for fourth. 2-0 Spurs.

Rishay: Shambolic Spurs? Or just unlucky to be repetitively steamrolled? I doubt Hull will be able to do much damage to Spurs. This fixture will be a test for Tottenham. So far we have seen that they like to play on the counter under Sherwood. I think this could very well be a tie if they are not careful. 2-1 Tottenham.

Bernie: I’m done saying the SAS can’t keep it up. They can and they will. West Brom are porous and there’s nothing new manager Pepe Mel can do about it. It seems that people are forgetting just how good Luis Suarez has been just because Sturridge is scoring goals now. Just you wait, Suarez will tear the brum apart. 3-1 Liverpool

Mohaned: Suarez will score and so will Sturridge. Lets just hope that Sturridge has his passing boots on this time or else we might not see him on the field for long! West Brom just lost a very important derby against villa 4-3 after leading 2-0 and that will affect them negatively. Liverpool will be too strong for them. 3-0 Liverpool.

Rishay: The 4-0 result against Everton this past weekend was a bit of a fluke, as the opening exchanges had Everton making a match out of it before 2 goals in 3 minutes saw Liverpool effectively end the game before half time. West Brom were unlucky to lose 4-3 to Villa in a thriller, but maybe they have some tricks up their sleeves for the visitors in this one. Ultimately, SAS is too hot right now, and Liverpool are looking dangerous. 3-1 Liverpool.

Bernie: Wenger’s men need to shake off the cobwebs. Yes a trip to St. Mary’s is never easy but if Arsenal are to be serious title contenders, these are the games they need to win. Crystal Palace come to the Emirates in high spirits. Tony Pulis has gotten his team energized and ready for any challenge. I expect them to try to be physical but Arsenal should dance around them and do the business. I just wonder if Chamakh will score. 2-0 Arsenal

Mohaned: Arsenal need to win a game BIG! They have had many chances to do so at home but did not manage it yet. Its just not clear where the goals will come from. Unless Podolski starts, there are no clear goal scoring threats in this Arsenal side. That being said, and crystal palace being in great form, Arsenal should be on top of the league before City play on Monday. 2-0 Arsenal.

Rishay: Arsenal are incapable of scoring more than 2 goals against the lower ranked teams. Anything other than a 2-0 prediction in this one would be going against the current. City have overtaken them at the top but might let that slip depending on how Chelsea are able to handle them at the Etihad. 2-0 Arsenal.

*Game of the week: El Ca$hico* 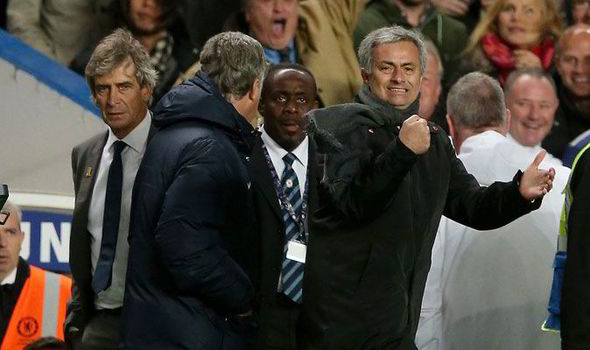 Bernie:  Man City have absolutely battered everyone who has come to the Etihad stadium (except for Palace). Jose Mourinho will have seen that any team that comes to play football at the Etihad gets taught a lesson. I don’t expect City to do the same thing to this Chelsea side though. Chelsea have the best defensive record for a reason. They won’t be expansive and they will plug in the holes. City will be frustrated in this game. The only issue is, if City do score first can Chelsea recover, I honestly have my doubts. This won’t be a thriller by any stretch of the imagination, unless City get another gift from the refs that is. 1-0 City

Mohaned: 113 goals scored this season! Are you kidding me! I cant wait to see Mourinho playing “19th century” football with a midfield consisting of 2 defensive mids. Chelsea COULD get a result here with some counterattacking football and i wouldnt past Mourinho to get a point. I worry with the absence of Aguero and with a possible Chelsea goal from a set piece. Ill go for a draw. 1-1 game.

Rishay: What a fixture! Chelsea took the spoils in this one when a defensive howler late in the game cost City the points. Their free scoring offence will be tested with a defensive Chelsea setup, and why wouldn’t they be? City have a perfect record at the Etihad and have been frighteningly good at scoring goals this season. I think they will put the Blues to the Sword. 4-2 City.