Mid terms have come and gone and everyone is enjoying the break with their families and the holiday spirit. It’s funny how the season mirrors academic scheduling. That being said, if students need an indication of where they stand mid way through the academic year then it’s clear that Premier League clubs need to do the same. If managers have any sense they’ll evaluate the performances, their squads, and maybe even their staff and make the necessary changes. In regards to the status of players, that can be addressed in the January transfer window.

I won’t go into every team. Rather I’ll indicate those who deserve special praise and those who deserve the harshest of criticisms in different categories. I’ll be checking out the comments for this one as it will spark good debate. 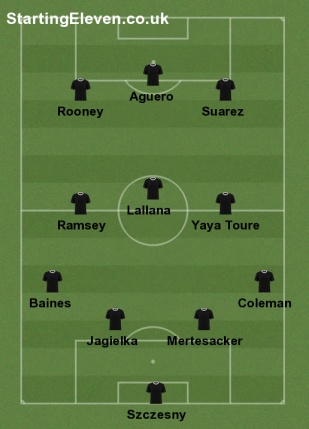 Unlike Samsung, our team to defend the earth from Aliens will include defenders. How they dreamt that team up I’ll never know but we are here to redeem planet earth and keep a clean sheet in the process. If you oppose our choices do like Michael Jackson and BEAT IT! Just kidding, hit up the comments we love your opinions.

This is what we have for the team of the season midway through the league. We chose players according to their impact on their teams as well as their individual performances. The two main categories for choosing a player was the joy he gave us watching him play as well as his stats which make sure his efforts aren’t at waste; an end product to flair and skill is always important.

The man missed the first 5 games of the season and he’s still the top scorer in the league. He’s easily the biggest talent in England and don’t bet against him winning the end of season awards. He’s the hungriest man out there, Branislav Ivanovic knows this first hand. The man has all the desire in the world, all the skill in the world and he has the end product to boot. There’s no player in world football right now who is better than Luis Suarez. Aaron Ramsey for a second looked like a world beater but Suarez in the last one month has turned it up a gear. Liverpool are desperate to hold on to him and succeeded in signing him to a new long term contract. This was an easy decision for us to make, there was no argument. The man simply has no peer in the league. He’s scored one of the most outrageous goals of the season (my pick for goal of the season) and he’s scored more goals than Tottenham in less games. That sums up the man, it’s almost unfair to say that he’s single handedly dragging Liverpool back to relevance but he is all things to that team and we’re blessed to be able to watch him week in and week out.

Worst Player – YOU’RE SO BAD WE HAD TO MAKE A MEME: 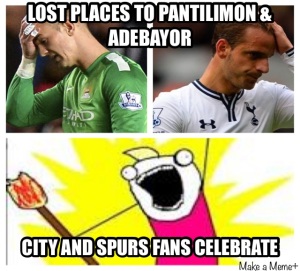 Let’s go to the opposite end of the spectrum. It’s unfair and impossible to say who is the candidate for worst player in the league. Usually mediocrity moves in packs so to separate people from here is tough. So I decided to take a twist on this concept. How about the most disappointing player of the season?

Joe Hart has been woeful to say the least, error after error after error finally saw Manuel Pellegrini lose patience in the England number one. Worst thing is he lost his place to Pantilimon. Where they found this guy I’ll never know but Joe Hart needs to do something about this and quickly.

Tottenham made so many signings this season after selling Gareth Bale to Real Madrid and except for Paulinho none have impressed. The man of whom so much was expected; Roberto Soldado has flattered to deceive. It’s shocking how ineffective he’s been. I chose to blame AVB’s tactics and Mohaned thinks he’s just horrible as a footballer, Rishay has a wait and see attitude, while Alex thinks the man can be saved. All in all he’s not been good enough no matter the circumstances and he must improve to save his reputation.

Game of the Season – THE GAME THAT LEFT YOU ALL WARM AND FUZZY INSIDE:

Sometimes you wake up at 7:45AM for a match (living in Toronto is hard) and you wonder why you even bothered (especially if you were out partying the night before). However, there’s always a game that makes you so happy that you didn’t press snooze that last time. This season that game was Everton vs Liverpool 3-3 at Goodison Park.

This pick here was completely unanimous. One of the few things we agree on. Watching this game was a glorious experience for me. I couldn’t believe what I was watching. I know Rishay is so happy about this game after meticulously researching the two Merseysiders for his article Merseyside Rising. This was the perfect advertisement for the Barclays Premier League. It had absolutely everything one could ask for in a football match. The game was end to end, there was class on the ball from Luis Suarez, we saw Lukaku bully defenders and force his way to goal twice. We saw fantastic goalkeeping from Mignolet and Tim Howard. Everton came back from 2-1 to lead 3-2 and we all thought they could pull this off until Daniel Sturridge came off the bench and broke Evertonian hearts with a late effort. The action on the pitch was heart pounding and that was complemented by the ferociousness and vibrancy of the Goodison Park faithful. Both sets of supporters did their clubs and the entire league a great service.

Most Disappointing Team -YOU WERE SUPPOSED TO BE A GOOD TEAM!

I’m not sure there can be any other candidate here besides Manchester United. Before play began vs West Ham on matchday 17, United were 14 points worse off than they were last season when they were top of the league. Same players, different manager, very different fortunes. Credit should be given to the great man for winning two championships and only losing the league by a grand total of 1 point over the last 4 years with these players. It’s not all Moyes’ fault though, in his defense some of these players were on their last legs and now need to be sent off to pasture. Rio Ferdinand, Nemanja Vidic, Patrice Evra, Ryan Giggs, Antonio Valencia and Anderson all seem to be past their expiry date. As a result the team has stuttered. We will accept losses to Liverpool and Man City. However, at Old Trafford, the team has been horrible. Losses to teams they really should beat, especially at home in West Brom, Everton and Newcastle leave United in 7th place going into matchday 18. If you want to see what the media thinks of United’s bad season, watch Carragher and Neville go at it.

Goal of the Season – THAT GOAL MADE YOU ALL TINGLY INSIDE:

In this category I’ve been overruled. The technique for Kasami’s strike versus Crystal Palace and the arrogance of Luis Suarez’s 40 yard bomb against Norwich are what I live for. Shocking, stunning, unpredictable! HOWEVER, I do admit that for a team to put together a passing move as intricate as the one that Arsenal pulled off against Norwich (poor Chris Hughton) is something to behold. Team goals don’t get much credit unless there are 28 passes involved. There weren’t that many passes but in this case there were multiple back heels, quick slick passing and a composed finish. Everything was done with only one touch from each player and the finish was good as well. Arsenal have had a fantastic season so far and this shows people how good they’ve been. Great goal for those who believe in playing football “the right way”. Arsenal right now are the team to watch and I hope for more jaw dropping goals like this.

Funniest Own Goal – YOU’RE SUPPOSED TO SCORE IN THE OTHER NET YOU GIT!

This is just pure comedy gold. Good one Vincent!

Best Manager – WHOSE THE BOSS? 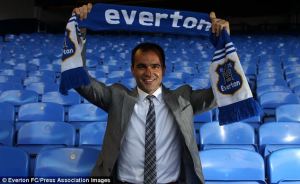 The easy answer to this one is Roberto Martinez. His appointment as Everton boss surprising split Evertonians down the middle. Many were happy that the team would “play football” finally while others were upset that a manager who got a team relegated would take over from David Moyes who did a fantastic job on a shoe string budget. What they forgot was that Martinez won the FA Cup last season. The man is a bit special. If Moyes, for Everton, was shrewd in the transfer market, Martinez has proved even better. Lukaku, Deulofeu and Gareth Barry have all been brought in on season long loans and they have all been fantastic. Martinez has not only given Ross Barkley more playing time but he’s given him more freedom on the pitch. That sense of freedom has been felt all around Goodison Park. Gone is the defensive mindset of Moyes and now you see a swashbuckling attacking side who can actually pass the ball around. It’s shocking really and wonderful to see. They got a point at the Emirates, beat Chelsea at Goodison, drew with Liverpool in the game of the season and won at Old Trafford for the first time in over 20 years. Sounds like a Cinderella story and those usually win.

We need to give praise as well to Brendan Rogers whose mission to bring the glory days back to Anfield could be on its way. Arsene Wenger’s is another redemption story and if the Gunners can get past this hectic period we could see the first trophy at the Emirates for 8 years.

Goalkeepers get no love in the world so we decided to give them some. The premier league has some great goalkeepers and coming up with the save of the season was really and I mean REALLY difficult. One thing that we all knew for sure was that Tim Krul against Tottenham produced one the best goalkeeping displays we’ve seen for years. He produced 14, think about that, 14 goal bound saves in that match. Absolutely wonderful. Enjoy the prestige of being selected for this Under The Cosh award Tim.

Fail Moment of the Season – YOU KNOB! WHY DID YOU DO THAT?

Let’s just laugh at this man one more time shall we? Artur Boruc, what were you thinking!?

Ramires conned the referee, watch Steven Reid’s hands go up. He doesn’t make contact with him, Ramires jumps into him. The ref takes an ice age to make up his mind and then gives the penalty. Steve Clarke had a lot to be annoyed about that’s for sure.