Bayern get a Déjà vu and Drogba Returns Home (Polls)

The round of 16 matches of the worlds most prestigious tournament have just been drawn with all teams aiming for a spot at the finals in Lisbon’s Stadium of Light on May 24, 2014. Lets analyse the match ups and get your opinion on who will make it through.

Manchester City qualified for the first time in their history only to be drawn against Messi and co, Arsenal got the hard draw that they deserved for squandering the top of the group position by facing the title holders in Bayern Munich, and Drogba returns home to Chelsea’s Stamford Bridge.

February is a long way away but we will analyse these 8 match ups according to today’s form with an eye on the future. The January transfer window will no doubt be a major factor, but with players cup tied, it may all be a moot point.  For the sake of neutrality, lets do this in the order at which the draw was conducted.

Messi and Aguero will put their world cup alliances aside and  go head to head as City and Barca face off in a very exciting two legged affair. Both teams have very similar playing styles and attributes this season; an attack focused game with slightly weaker defenses. It will be a midfield focused battle with the 3 men in the center from both sides trying to grasp a stranglehold on the game. Iniesta, Busquets and Xavi versus Silva, Yaya, and Fernandinho.

The key to advancing is to minimize mistakes and turnovers as both teams are blistering fast on the counter attack. Concentrations levels have to be at an all time constant high as both these teams have the ability to create something from nothing against the run of play.

Barcelona will of course look to have most of the possession but this season they have not been as effective at it as we expect. ManCity definitely have a chance to go through if they can make their home game count, right? 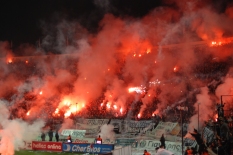 One thing we can guarantee from a Greek side in the champions league is passion, flair (literally) and heart with an outstanding support form the fans. The picture on the left is what the Karaiskakis Stadium will look like when ManUtd go to visit. Im not sure how many English fans want to make the journey and “socialize” with the 33,000 Olympiacos fans in the stands, or even so before the game in Athens. Good luck!

Manchester United will be very happy with the draw as it should be a very winnable knockout round for them. A steady mature performance in Greece with a dominating old trafford outing and they will go through. Its hard to imagine that United wont strengthen in January so that will also be a major factor. Players to watch out for in Olympiacos are Mitroglou and Arsenal’s loanee Joel Campbell.

Surprises do happen in the champions league but this is a little far fetched. Or is it?

Can Atletico Madrid replace their Europa winners cup from 2012 with a Champions league trophy in 2014? Anything is possible. So far they have been on a great run of form both domestically in the league; challenging Barcelona and Real Madrid, and in the Champions league by finishing top of their group without a loss and qualifying with a very impressive 16 points of a possible 18. They have no outstanding players carrying them, instead they play like a well oiled machine.

Milan on the other hand have been struggling in the Serie A and scrapped through their group to qualify with only 2 wins out of 6. They will need to pick up their form and hope key players in Balotelli and Kaka can really step up and give a respectable performance as Serie A ambassadors. February is a long time away and you cant predict what will happen but according to the now, Atletico have the upper hand. Agreed?

This man will be every Leverkusen fan’s nightmare till February. Opposition players, coaches, and fans alike never want to see Ibrahimovic in that pose. The pose that follows a world class goal of which he is proud of, and by his standards that means its usually goal of the season. His sidekicks aren’t that bad either, to name a few: Cavani, Lavezzi, Lucas …

Leverkusen have been in great form in the Bundesliga and deservedly qualified from their champions league group with the only hiccup being the 5-0 humiliation by ManUtd at home. They are a very solid side who try and play fluent football. I’ve been very impressed with their Korean striker; Son Heung-Min. With his pace and finishing they always have a chance!

PSG will hope this is their year to go far in the champions league after a dissapointing loss to Barcelona in the previous season. They were so close, until a certain Lionel took the field. Can they do it this year?

Shhhh i don’t think anyone has noticed yet. Drogba is having his Chelsea reunion! I cant believe no one is talking about it …. Alright sarcasm aside, the big news is Drogba’s return to Stamford Bridge. He described himself as “the luckiest man in the world” and that for this knockout round he would be playing both games “at home”. Love fest aside, this may actually be a very exciting tie once we get past the Drogba-Mourinho 5 minute hugging interval.

Chelsea will see themselves as favorites in this one and rightly so. This is why you come first in the group stages. You usually almost always get a a favorable draw. Although Galatasaray knocked out Juve to the depth of the Europa league, Chelsea will be a completely different beast. Will Chelsea run away with this tie or will the weather gods be in Galatasaray’s favour again?

“Relax. Ive got this.” As usual, Cristiano is expected to come up with the goods. The last time Madrid faced a German side in the knockout stages it didn’t bode well for them. Then again, Dortmund had Lewandowski on fire that night. Schalke will be no where near as demanding a game as Dortmund but they could cause trouble. Ancelotti will have to have his starting 11 nailed down by then as so far he is mixing and matching, and lets not even get started on trying to fit Bale forcefully in the lineup. Schalke’s danger man will always be Julian Draxler. Nullify him and Madrid should cruise.

This is not the draw which Schalke asked Santa for. Schalke have not been performing at their best this season. Many underwhelming performances in the Bundesliga and some iffy CL performances will have their fans worried. Then again, these knockout games are a one off and anything can happen. Ramos could get another stupid red card for example, adding to his 257 previous ones. All we know is that if Ronaldo is on form, Schalke will have trouble coping. What do you think? 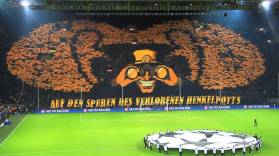 Champions league nights at the Westfalenstadion, or the Signal Iduna Park, whatever you want to call it, are always a sight to behold. The Dortmund fans are as passionate as they come. They will be glad to have come first in their CL group of death with Arsenal and Napoli trailing to get an easy tie. Playing in Russia in the middle of winter is never favoured but its better than playing Barcelona, for example, in perfect conditions.

Dortmund have been slightly less impressive than last season. They aren’t as defensively sound but that’s to be expected as they have been missing almost all 4 starting defenders for a couple of months now as well as their center of midfield rock in Gundogan. Zenit will try their best but Dortmund’s fast passing game with high pressure, as we saw in the group stages, will be unplayable. Are those binoculars already looking at the quarter finals?

Lets hope not many of you scrolled furiously through the article to find this match up. I cant blame you if you did. This, alongside Manchester City vs Barcelona, are the ties of the draw for sure. Arsenal and Bayern meet again in consecutive seasons at the round of 16. Last time around Bayern went through on away goals after a 3-3 aggregate. many will claim that Arsenal’s 2-0 win at the Allianz Arena was a result of Bayern taking their foot off the gas as they came away with a deserved 3-1 win at the Emirates. Either way, this is the hardest draw bayern could have got in light of their options.

The Bavarian club from Munich are the favorites, as they are deemed the best team in Europe and a strong favorite to win the whole thing. For Arsenal fans, its another tough round of 16 match up with Milan and Barca x2 previously. From a neutral perspective, these are the games you want to tune in for. An exciting encounter that will be a spectacle for the “right” way of playing football. Who edges it?