Valdes Hands off to …

Another thing for Barcelona to worry about!

Victor Valdes is sticking to his claim from last year; he will leave Barcelona on a free at the end of this season and will not be renewing his contract with the Catalans. A year ago, this was very welcoming news to some Barcelona faithful as many saw Victor to be their weakest link. Unfortunately for them, the Spanish international is producing a master class in performances this season and has been at the top of his game. A well timed resurgence to help his team or, more cynically, to attract suitors.

“My time here is done,” said the goalkeeper “They offered me the chance to renew [my contract] but my decision had been made.I am seeking new challenges. I want to play in another league and be with my family in another place. But this season I have still been feeling the love and support of the people and that is greatly appreciated.” 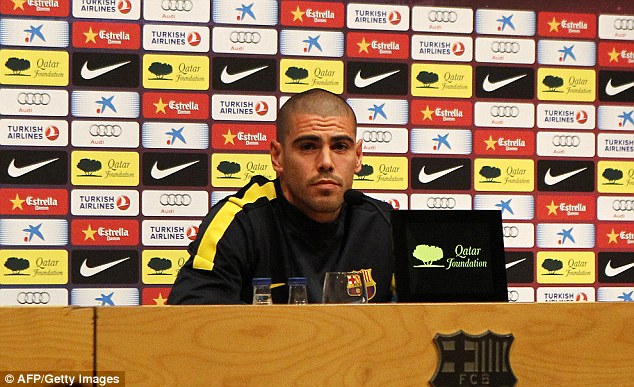 Barcelona have three options in dealing with this situation, well four if you think they can keep the ball so much that they don’t even need a keeper: Promote a goalkeeper from within, buy a world class goalkeeper, or buy a young prospect. Keep in mind that the way Barcelona play their football, their ranking of goalkeeping attributes criteria are very different from any club. They will not be looking for the most solid shot stopper or the most acrobatic keeper. Their main criteria in choosing a new keeper will be how well he plays with his feet. Playing the ball back to Valdes to avoid losing possession or resorting to a long aimless ball has always been at the heart of Barcelona’s possession game. Valdes at his time with the Catalans has touched the ball with his feet many many many more times per game than with his hands. Lets take a look at their options.

Their current substitute goal keeper is Pinto. Some of you probably dont even know who he is. Trust me when i tell you, he is not good enough to be Barcelona’s first team keeper. Not a chance. So we shouldn’t really waste too much time on this. It wont happen. Valdes had some low moments in his career but even then he wasn’t replaced by Pinto. Pinto’s appearances have been limited to Copa del Ray games and filling in for the injured Valdes. No matter how long Pinto grows that pony tail of his, it will not be enough to get him a starting spot.

So, established world class keepers. There are a couple of problems with this option. Firstly, it will probably be quite costly. Seeing as the goal keeping position might just be the most important one on a teams formation, it could still be worth splashing the cash. Secondly, most world class keepers are well established at their clubs and are not looking for a move, and if they are, their clubs will definitely not let them go easy. One name floating around in this category is that of Pepe Reina. Reina’s position is curious because he is currently out on loan from Liverpool at Napoli which is an indication that he is surplus to requirements at Merseyside. Liverpool are more than happy with their new signing in the goal keeper department of Mignolet who is probably the keeper playing the best football in the premier league right now. Reina, being Spanish, and already familiar with the Barcelona squad from his national team duties could be a factor in him being a favorite to take over Valdes, not to forget that Reina came through the Barcelona youth ranks. All in all its a move that fits all parties. Cesc seems to agree, Cesc Fabregas backs Barcelona’s Pepe Reina to replace Victor Valdes (sportsmole.co.uk) Im sure Reina does too. Maybe on the next Spanish international team trip they should force a Barcelona shirt on Reina on stage! Im sure he has as much Barca DNA as Cesc. Lets just hope he doesn’t flop as hard.

Reina: I want one too!

Another established name being thrown about is that of Peter Cech. Reason being that rumors came out recently that Chelsea have already agreed a contract with Victor Valdes. Insane stuff … Probably just rumors and lazy journalism but you never know! So the idea is Valdes and Cech just swap places. Bad deal for Chelsea if you ask me. Both keepers at the same age and i don’t see the logic from Chelsea’s point of view. Then again, logic hasn’t always been their strong suit.

Speaking of Chelsea, they still have young Courtois out on loan to Atletico Madrid. He has been brilliant for them the last couple of seasons and I dont see why he would not be Cech’s direct replacement in the near future. If Courtois, however, decides to remain in Spain and not return to his parent club then he can be a very realistic option for Barcelona’s decision makers. Young, tall, and skillful, he has all it takes to make it.

The young guns! Lets just get this one out the way first. De Gea. He will not be leaving Manchester anytime soon and if he does Barcelona will have to splash the cash! Man Utd bought him for approximately 20 million Euros two seasons ago, making him the second most expensive keeper in the history of the game after the legendary Buffon, and they wont let him go for less that double that. Wont happen. Man Utd have put too much effort and time in De Gea’s case to get him to his good form this season compared to last season’s underwhelming performances; mainly due to laziness and one too many tacos according to his former coach. David de Gea would ‘eat too many tacos,’ former United goalkeeper coach says (prosoccertalk.nbcsports.com)

A more realistic target is 21 year old ter Stegen. The young goalkeeper has been very impressive lately for Borussia Mönchengladbach in the Bundesliga.  Reports in the German media suggest that ter Stegen has refused to renew his contract with Mönchengladbach, ending in 2015, which will see him be an available option to replace Valdes. Barcelona wont have to break the bank for his services as he will probably be available for 15 million euros or so. He seems to be one for the future and if Barcelona decide to go for youth then he has what it takes to be Barcelona’s number one for at least the next decade.

Either way, Im sure the Barcelona scouts are well prepared for Valdes’ replacement as he has given them ample warning that he will not be renewing his contract. Take that with a pinch of salt though, as they have failed to land a single CB to reinforce their, quite frankly, embarrassing back line this season. Whether they go for youth or experience, this is a golden opportunity for Barcelona to get it right and cement the goalkeeping position for years to come without looking back. For many Barcelona fans, Valdes leaving, may be the case of not knowing what you had till you lost it.